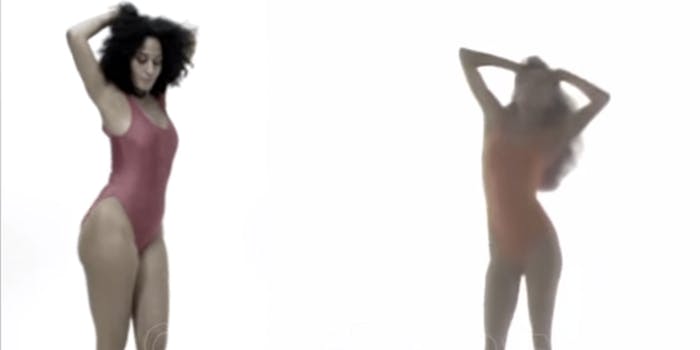 You can't help but love your body watching Tracee Ellis Ross dance around and love hers.

Over the weekend, Black-ish star Tracee Ellis Ross released #WORKTHATBODY2015, a loving recreation of her mother Diana’s 1981 music video. The video merges grainy footage from the original video with new images of the younger Ross dancing alongside her mother in matching brightly-colored leotards. “I think you’re so much hotter than me!” she giggles at the end. In two days, the video has garnered over 70,000 views on YouTube:

The project has feminist significance for Ross, in addition to the clear personal connection. “I am keenly aware of how we as women (and most specifically women of color) are presented and portrayed in media and how we present ourselves,” she wrote on her website. “And here was my mama from almost 30 years ago on the surface doing something that often snags me in videos today…why did I feel differently about it?”

For Ross, the difference between “Work That Body” and pop videos of today is the pure joy and unabashed self-love that her mother exudes as she dances. “I have spoken before about encouraging women to shift our gaze from how we are seen to how we are seeing and, more important, feeling,” she continues. “And I saw a woman feeling joyful in herself as a whole being; she didn’t seem to be presenting her ass or saying look at all the ways I can make myself look appealing to YOU. She seems to be saying, ‘this is ME feeling good and I am strong and sexy and joyful in ME’!”

This is not the first time Ross has commented on her mother’s body positivity and comfort in her skin. Earlier this year, Ross told The New York Times that while her mother is certainly “glamorous,” she “is also really real…I grew up with a mother who had babies crawling on her head and spitting up on her when she was wearing gorgeous, expensive things, and it was never an issue.” The Ross daughters had their own lessons in body positivity at a young age, posing for Andy Warhol at the Factory when they were children.

The ultimate message of #WORKTHATBODY2015 is one that can speak to all women, not just those raised by celebrities and style icons. “I hope [the video] inspires you to find and be in the joy of your own body!” Ross writes at the end of her blog post.

If the excitement flooding the hashtag on Twitter is any indication, the video is already having that effect.