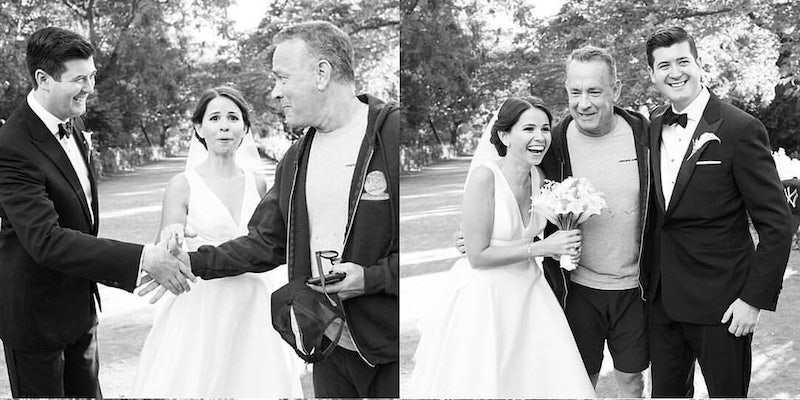 It's not the first time he's crashed a wedding.

If you want your wedding photos to go viral, your best bet is to plant yourself in a public space and hope a celebrity walks by. Since famous people tend to be affable folks who aren’t afraid of a professional photographer, let them jump in on the shoot, upload the photos, and wait for the instant Reddit upvotes.

That’s at least what’s happened for one couple, whose wedding portraits were interrupted by Tom Hanks. As you can see, the bride was beyond excited by the welcome photobomb.

Hanks even tweeted the selfie of him with the happy couple, wishing them well.

Apparently, this is not the first time Hanks has jumped in on someone else’s wedding. In 1993, while filming Forrest Gump in Beaufort, South Carolina, Hanks reportedly wished bride Mary Dunning Chapman luck as she was about to walk into the church. “I saw this light blue Lincoln at the stop light just down from the church, and there was a guy hanging out waving and honking the horn,” she wrote. “I didn’t think anything of it…..by the time we got to the front of the church, the car pulled up, and this guy hops out and runs up to me! He says, ‘Hey, I’m Tom Hanks, and I just wanted to say good luck!’”

Update 7:48am, Sept. 28: The lucky couple uploaded a video of their random encounter with Tom Hanks to Vimeo, and he’s even more charming than you might’ve expected.