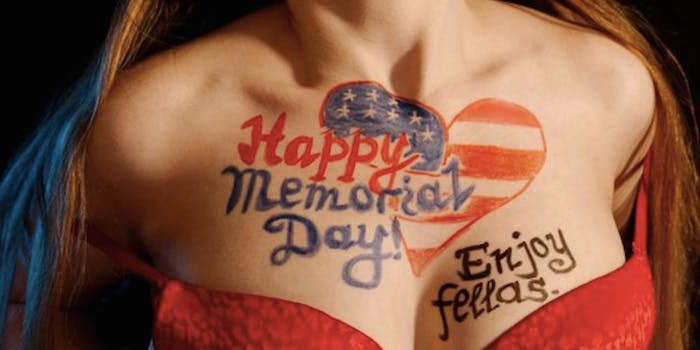 We talked to the founder of Tittygram, the so-called ‘Uber for boobs’

We talked to founder Vladimir Gritsenko about Tittygram, a startup that he claims is the future of advertising.

When in doubt, say it with boobs.

The Russian startup Tittygram offers this simple value proposition: A message of your choice is scrawled on a buxom model’s chest, then photographed and delivered electronically for $10. Two percent of all proceeds go towards breast cancer research.

When the startup was first launched earlier this year, Tittygram garnered a great deal of press attention, as well as a writeup on this site. Most people dismissed it as a sexist and offensive marketing ploy, or at the very least a mere novelty. But Tittygram’s founder, Vladimir Gritsenko, says it’s much more than that.

Gritsenko is a Russian technologist with 15 years experience building e-commerce software. He says his goal in building Tittygram was “to create something with with huge potential that maybe [will] be worth billions of dollars in a year or two.” He admires the technical simplicity of a company like Snapchat, not to mention its $15 billion valuation. Couldn’t a boob-centric advertising platform have the same monetary value?

Of course, like most startups, there’s already some precedent for a text-on-boobs advertising platform in Russia. Gritsenko says the service is easy to find on VKontakte, where women work independently to offer up their busts as an advertising platform, via a Craigslist-style system. But women working independently this way have no guarantee of receiving their money. Insofar as there’s a Russian boob advertising “industry” to speak of, Tittygram more or less legitimizes it, putting a proper business wrapper over things in order to make sure that models see their payday.

“There are a number of occasions for sending Tittygrams,” he told the Daily Dot. “We see greetings of all kinds, messages to society like ‘smile more often.'”

But as is the case with a normal social network, there’s still a limit on what you can and can’t post on Tittygram.

“Silly [messages] are not allowed,” Gritsenko said. “We moderate what customers request, and if one orders silly or vulgar Tittygram, we don’t pass it through to models. We refund their money or ask them to change the wording.” 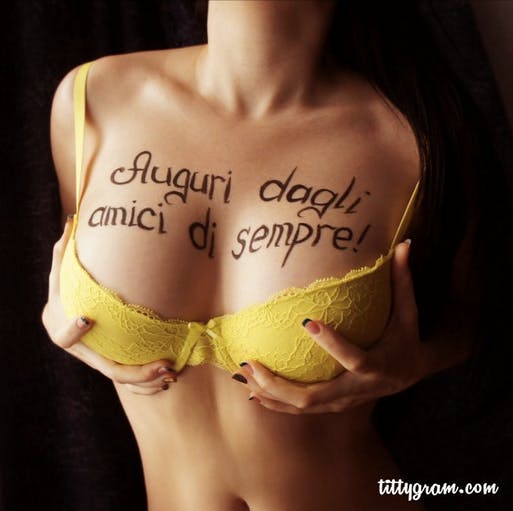 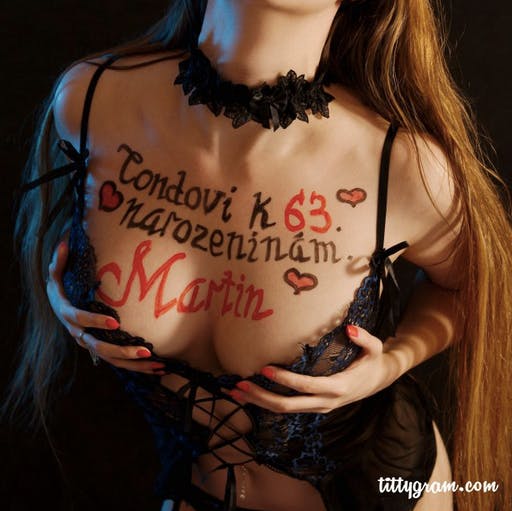 Given the universal appeal of breasts, it’s hard to believe that a company like Tittygram hasn’t yet been started in the United States. But Gritsenko says that’s to be expected.

“I believe that the United States are more conservative towards these services,” he told the Daily Dot. “What’s more strange here is that when we expanded to the US market, we experienced a huge request of silly tittygrams, some 20 percent were quite vulgar and silly. We just rejected them. The US is the motherland of strip clubs and college parties, but in business or at work, it’s difficult.”

Of course, it goes without saying that Tittygram objectifies women by turning them into human stationery. Unsurprisingly, the startup has garnered a great deal of backlash from Russian feminists, with one woman noting on the group’s Facebook page: “Especially ironic when the same people ‘like’ this and ‘there’s no sexism in Russia’ posts on FB [Facebook].”

The idea of using breasts as advertising space also hasn’t gone well when other companies adopt the business model. Burger King’s social media team in Russia, for example, made an ad with help from Tittygram. It read “I love Burger King!” across a model’s chest, and the company came under fire for its sexist advertising methods.

There does, however, appear to be a generally global appeal to Tittygram’s services. “Asian markets are absolutely positive about tits,” Gritsenko said. “Brazil and Italy as well.”

There are no immediate plans for the mammary-centric startup to expand, and Gritsenko is tight-lipped regarding specific details. That said, he told the Daily Dot the company is constantly looking for “ways to make our world better. We really believe that donating to breast cancer research is a good start.”