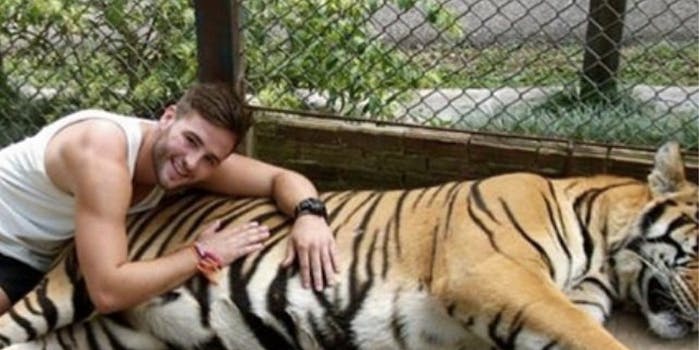 Thanks to New York law, Tinder Guys With Tigers is about to become extinct

Pretty soon you won't be able to pose with a big cat in New York state. Sorry, Calvin and Hobbes.

Since time immemorial, men have been posting photos of themselves on Tinder posing with tigers, presumably in an effort to show prospective matches how worldly and adventurous they are (“What, this big guy? He’s just an overgrown kitty. I don’t fear danger, for danger is my middle name. Now swipe right so I can take you out for overpriced shots and make you pay for them before I grope you on my ironic racecar bed”).

Thankfully, the New York State Assembly is putting a stop to this obnoxious practice. They’ve just passed legislation preventing people in New York from taking pictures of themselves posing with the big cats while “hugging, patting, or otherwise touching” them.

Manhattan Assemblywoman Linda Rosenthal, who introduced the legislation, says the bill is targeted at traveling circuses and fairs, which invite patrons to get up close and personal with the big cats. Rosenthal says the bill is intended to protect both the tigers themselves and humans, as there have been seven incidents involving a tiger at a New York state fair in the past fifteen years.

“They can still pose with bears and monkeys,” Rosenthal recently told the New York Post. “They just have to take tigers off their list.” Violators of the new law will face a $500 fine.

Although Rosenthal acknowledges that the bill was in part inspired by people posting tiger selfies on dating sites—a trend so widespread that it inspired a Tumblr, Tinder Guys With Tigers—it extends to other social media platforms as well. So if Calvin and Hobbes ever summer in the Hamptons and they want to post their vacation photos on Facebook, unfortunately one of them will have to stay behind the camera.