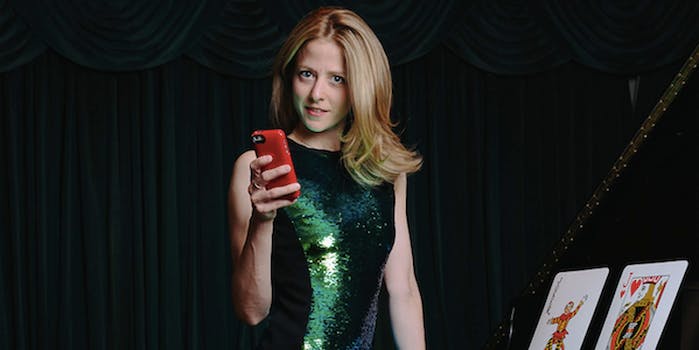 How one woman turned her Tinder nightmares into a musical comedy

Mel Delancey’s dating life has been filled with horror stories—but she wants you to know her show is more of a comedy. Her musical memoir, “Tinder Roulette,” is playing now in New York City and tells the story of her many romances, trysts and disses. Despite the disappointments and horrible coincidences she recounts, the show serves as more of a learning lesson than a cautionary tale.

“I didnt want it to be a sad show,” Delancey told the Daily Dot. “I like dating. My life has been more interesting because I’ve taken these risks.”

The 36-year-old personal trainer and actress has been playing a fairly new role for the last few years: a newly single woman in the age of the dating app. After a divorce three years ago from her husband of nine years, Delancey found herself back in the dating game—only the rules had completely changed since she was last single at 24. It took time to make sense of profiles, swiping left and right, and sexting.

“Last time I was dating, in my early twenties, the boys I was meeting were boys!” She recalled. “Now I’m meeting men that are men, and even older-than-me-men. But I was dating with the mindset of a 20-year-old [at the beginning].” 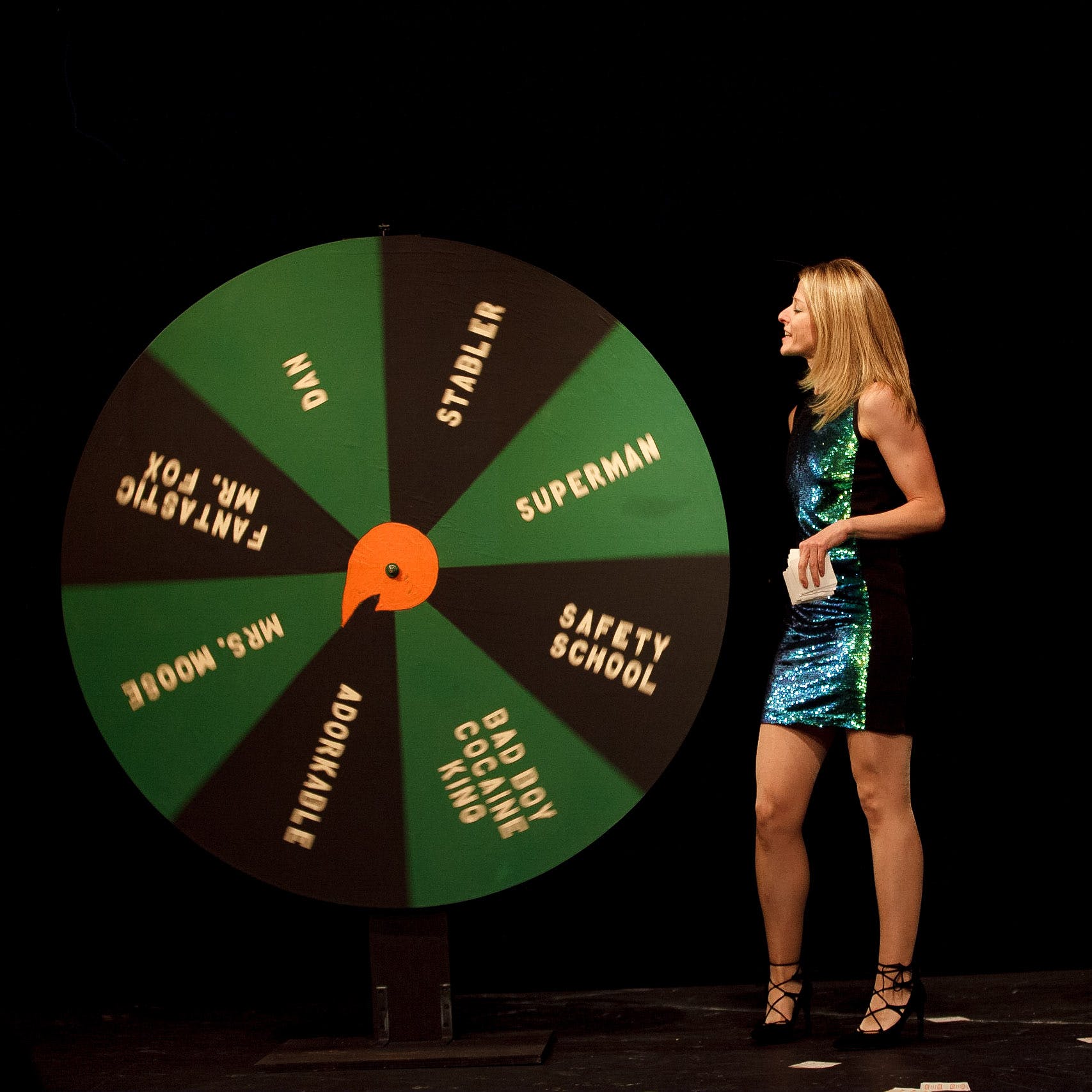 Mel and her love roulette wheel.

Her show—playing at the 13th Street Repertory Theater through November 14th—centers on this struggle to find her footing. It’s coupled with the idea of dating (and life) all being a gamble, which stems from her parents’ gambling addictions.

Growing up in Westchester, New York, Delancey and her two sisters were exposed to betting and odds at a young age, thanks to frequent family trips to the race track. These trips were rarely fruitful monetarily, but in the show we learn that boring days at the track allowed Delancey’s imagination to flourish. And it’s this imagination that took the very common struggle of dating in New York City, and turned it into a one-woman musical review.

Delancey first began online dating after her divorce by using JDate, from which she had a brief serious relationship. After that ended, she moved onto Match.com and Tinder where she tried the “playing the field” approach. “They’re [men] so scared of wanting to spend too much time with you.” So she thought, “if you don’t have time for me, someone does.”

But casting a wide net turned out to be the wrong strategy for her.

“I wanted to play the field, meet lots of people,” Delancey recalled. “I also have a lot of friends who are guys, so I wanted to do it the way that guys do it, which might have worked to my detriment because I just assume guys aren’t taking it seriously.” But she discovered something surprising: “A lot of guys are taking it seriously.”

Through a mixture of monologues, songs from musical classics like Fiddler on the Roof, Guys and Dolls and Cabaret, cameos by her real-life younger sisters, Joslyn and Jennifer, and her stuffed Moose, ‘Moose,’ we get to know the men who have defined Delancey’s romantic life. We meet “Fantastic Mr. Fox” and “Adorkable,” two guys she met on Tinder who [spoiler] ended up knowing each other IRL. There’s also Silicon Superman, a wealthy bicoastal suitor with whom she exchanged risque photos but never actually met. 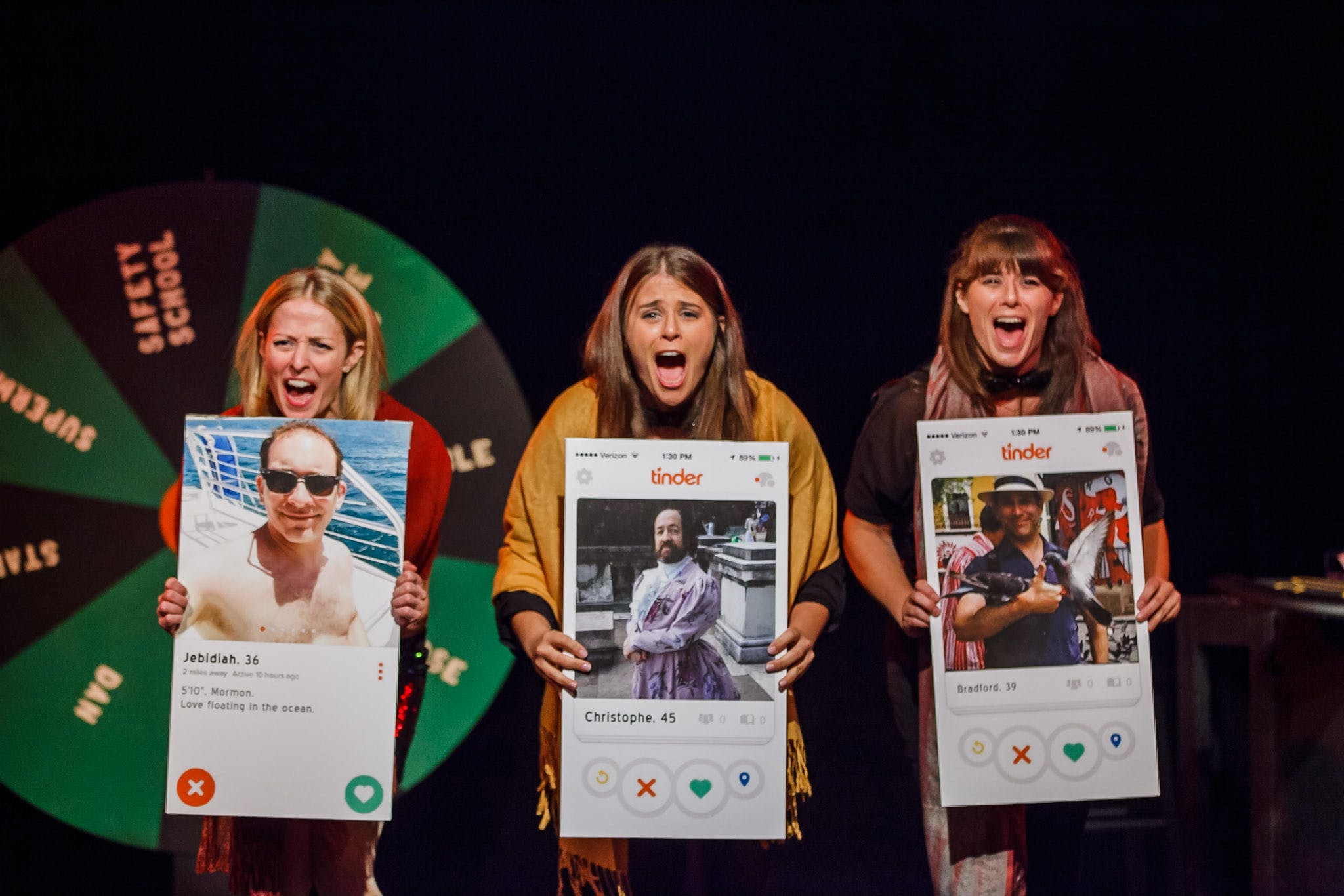 Mel and her sisters.

Even though none of these relationships turned out to be nothing more than passing flings, Delancey remains friends with all the men. She even had two of them come see the show. Superman bought a ticket to be supportive even though he couldn’t attend.

Delancey (like many women who write about dating escapades—including this writer) has been accused of mining Tinder for personal gain and fodder for her work, an accusation that the hopeless romantic can hardly believe. “I wasn’t on Tinder looking for material,” she said. “I was going on dates because I want a boyfriend…a good boyfriend.”

Her real life is a continuation of the journey that she takes the audience on in “Tinder Roulette.” It’s one of heartbreak and struggle, but ultimately one of hope—a hope she continues to put out into the universe, while looking for her next great love (or her next great story.)

“I’m a little embarrassed that I’m doing the show and I’m still single,” Delancey confessed. “I feel like I’m kind of failing…so that’s maybe a little bit sad. I would’ve loved to have a happy ending and had my boyfriend there on opening night…that would’ve been a really nice ending of this process for me.”

But until she finds “the one,” she’ll keep giving it a shot with different ones. “I’m still optimistic! You have to be. Otherwise, why are you doing it?”