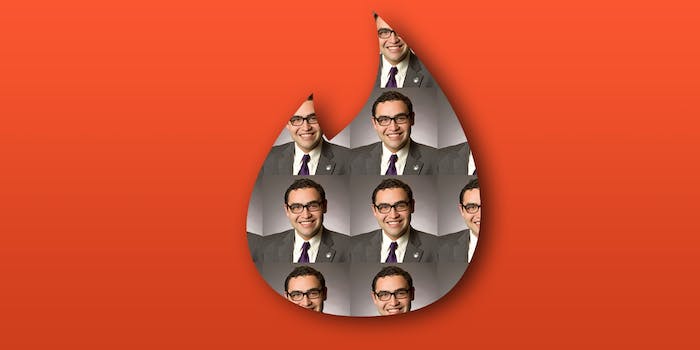 It's no secret that sex workers use dating sites and apps to advertise. But this state senator isn't happy about that.

Anyone who’s ever used an online dating service like Tinder knows that there are sex workers on the app. I know it. You know it. Even Tinder, to a certain extent, probably knows it.

One person who doesn’t know about Tinder’s popularity among cam girls and sex workers, however, is New Mexico State Sen. Jacob Candelaria. He’s on a quest to clean up prostitution ads on online dating networks, and he’s setting his sights specifically on Tinder.

According to KOB Eyewitness News 4, for the past two years the Democratic state senator, who is also the first openly gay male member of the New Mexico State Senate, has been trying to usher in a bill to limit sex worker advertising on online dating sites. Earlier this year, he teamed up with Republican Rep. Tim Lewis to sponsor a bill prohibiting the promotion of online prostitution, as well as a similar bill the year before, none of which passed through the New Mexico Senate.

Online dating platforms serve as an ideal venue for solicitation, Candelaria says, because they offer “a certain degree of anonymity for people who are trying to break the law and exploit others,” Candelaria told KOB News. “It’s very cheap and it’s not fully regulated. Our laws can’t and don’t keep pace with technological advancement and there will always be people looking to exploit those loopholes.”

Now, he’s zeroing in on Tinder and other mobile dating apps, and is working on yet another bill to prevent sex workers from advertising on the app. “We’re weak,” Candelaria said. “Our courts have said our pimping laws are not applicable to the internet.”

Although Tinder explicitly prohibits commercial solicitation in its terms of service, it’s absolutely no secret that sex workers have used Tinder and other mobile dating apps as an advertising tool. This is probably in part due to the fact that Tinder doesn’t rigorously screen its users upon registration (as indicated by the prevalence of sexy spambots on the app), and in part due to the fact that when any social network reaches a certain tipping point, the adult industry will inevitably flock to it for advertising purposes.

But even though Tinder can take steps to limit commercial solicitation on their platform, it probably can’t prevent the practice entirely, just as it can’t get rid of every spambot on its network. Furthermore, while it makes sense in terms of marketing why Tinder wouldn’t want sex workers to advertise on what’s essentially a PG-rated social platform, it’s unclear what, exactly, Candelaria is hoping to accomplish with this bill, and why he’s so interested in curbing online prostitution ads in the first place.

We’ve reached out to get a clearer explanation of his motivations and will update when we hear back. But the fact that Candelaria uses the term “pimping” to describe sex workers who advertise online tips his hand some, and gives a pretty clear indication of his ideological stance on the issue. But it’s safe to say that his constituents would probably be better off with his spending less time going after sex workers and wagging his finger at boob default pics on Tinder, and more time dealing with other issues— like for instance, say, the fact that he represents the poorest state in America.

Update: Sen. Candelaria responded via email with the following clarifications:

First off, the legislation is not specifically “targeted” at Tindr [sic​] et al. It is a bill designed to update our pimping statutes to include those people who use the internet to exploit others in the sex trade. That exploitation can happen on a variety of online platforms: dating websites, and yes Tindr. The UN has zeroed in on the practice of internet primping [sic​] as a major factor in the international, and national, sex trade/human trafficking issue.

We feel this is an important issue for the legislature to act on, as a District Court judge in NM recently threw out a case involving the online sexual exploitation of women because our state laws define/contemplate “promoting prostitution,” i.e. pimping, as coming from a “house or prostitution”—a physical structure. The judge, therefore, ruled that the current law could not be used to prosecute those who sexually exploit others online.

Candelaria also objected to the speculation in the final paragraph that his legislative time would be better spent combating other issues, such as poverty, rather than prostitution on online dating platforms: “In 2013, my first year in the senate, I sponsored an expansion of the state’s working families tax credit; last year, I passed a bill appropriating 50 million for broadband in rural/low-income schools to close the digital divide among minority and low income students.”