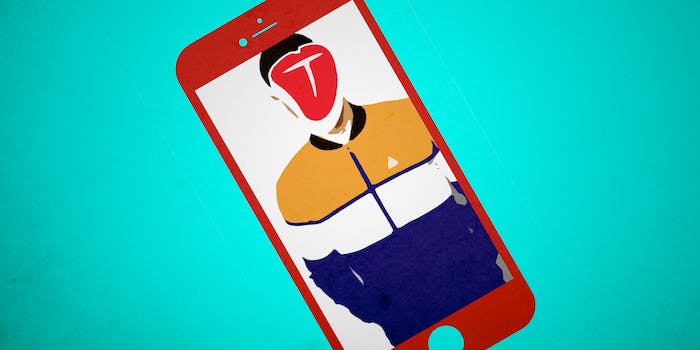 You can now officially transform into Tinder meat

The MeatFace campaign wants to start a conversation about how we judge people on Tinder.

If you’ve ever had the thought, “Ugh, I feel like a piece of meat!” while swiping on Tinder, rest assured that you are not alone in this meatspace. Others feel your pain—though, chances are, they’d like to feel your flesh, too.

To cope with this dichotomy, there’s MeatFace, a new tongue-in-cheek viral campaign and dating app intervention that gives everyone the opportunity to stop treating other people like objects and start a real conversation. And it all begins with turning your profile pic into an avatar steak.

Anyone can go to MeatFace.me and take a MeatFace selfie using the site’s interface; or you could just upload an old selfie and throw some meat on it. From there, open up your Tinder/Bumble/Hinge/HER/other dating app and swap out one or all of your profile pictures for the meatface(s) you made. And viola! You’ve finally become the piece of meat that you’ve likely made others into. Feels great, right?

Creative studio HelloVelocity and dating app Siren, which prides itself on user privacy and “mutual respect,” have collaborated on MeatFace to encourage people to think more deeply about the mechanisms of dating apps and how they shape our perceptions of others. “If you want to be treated like a piece of meat, then more power to you,” says MeatFace co-founder and Siren founder Susie Lee. “If you want something beyond that, then you can fight the swipe without necessarily being anti-Tinder.”

This venture makes sense for Lee, who created the dating app Siren “as my response both as a woman weirded out by the objectification and selling of oneself, and as an artist whose practice revolves around the ways technology amplifies and accelerates human tendencies.” But because the majority of people in the dating world are still not as familiar with Siren, she decided to launch MeatFace across more popular platforms like Tinder.

More than 1,000 people in Seattle and New York have already downloaded the MeatFace mask, because as anyone who “plays” Tinder will know, the app not just for meeting people, it’s also the perfect space for writing jokes and being a joke in-and-of itself. But for those who take it seriously, the focus on a one-second hot-or-not impression can be discouraging, and there are little ways to filter for more meaningful interactions.

Healthy relationships coach Kyle Benson says he often hears of Tind-induced frustrations from his clients. “Sometimes people look at the bio, but mostly it’s just the picture,” says Benson. “It just becomes this game that’s not about making connection, but just about how many connections you can get.”

This is exactly what MeatFace’s #fighttheswipe is working against. Oftentimes, the gamification element of Tinder, Bumble, or any of the other apps happens because of a general frustration at not feeling a connection, or just pure boredom. In this regard, Tinder becomes entertainment, on par with watching TV. When this happens, and it seems like there’s no one there for you, getting more and more matches can give the user a different high and validation—which is nothing like the longer, riskier fulfillment of actually getting to know people who might make great potential partners.

“Dating is way more than just attraction,” says Benson. “You need [things like] shared values and humor. You need to get to know more of the person.” 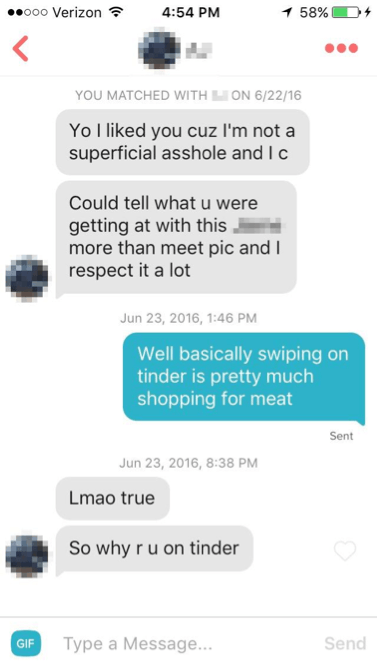 With MeatFace, though, you can start a conversation with someone who at least, on the surface, seems different from the rest of the meatheads out there. Other times, using the meat can come off as a way to discuss the Tinderization of feeling, an effect that explains the burnout one experiences after using Tinder and other dating apps to their personal breaking point.

MeatFace also welcomes people to submit screengrabs of those conversations. As one would imagine, they are often different than the usual Tinder screengrabs we’re used to seeing, like Tinder-style sexual harassment with berating or obscene messages or jokes at other people’s expense.

When users put on their MeatFace, people have responded with curiosity, laughter, and, of course, defensiveness. But at least it’s a reciprocal conversation. Hell, even if you don’t want to talk, you can still be honest about why you’re there, and put your meat front and center.