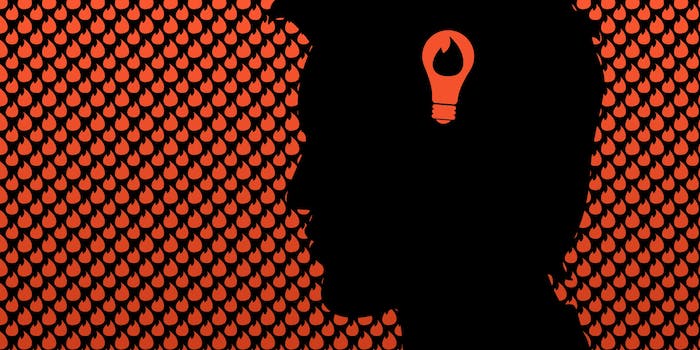 The dating app is charging more for users over 30 to use its premium service. Screw you, Tinder. I'm done.

There was a time when I was sternly-worded-letter angry at Victoria’s Secret over their pricing — specifically, how A, B and C cups of many styles were one price, and anything D-cup or bigger of the same styles were a few dollars more.

I’ve heard the “it costs more because it takes more material” argument, but then shouldn’t the B cost more than the A, and C cost more than the B? And don’t some of the smaller sizes have more padding than the bigger ones, thereby essentially leveling the material-amount playing field?

Regardless of how it was justified, to me it felt like a penalty for having a little more boulder below the shoulders. It hasn’t stopped me from recently forking over $6 more than my smaller-breasted brethren for their Incredible Demi Bra, though, because 1) it’s ridiculously comfortable and 2) it’s one of the only styles of theirs that goes up to 38DDD. Whatever.

I might have decided to conditionally forgive Victoria’s Secret for their big-tit tax, but another business that knows my cleavage pretty intimately, Tinder, has given me a similar yet, in my opinion, unforgivable reason to stop using their service.

Well, I mean, it’s Tinder — that it’s Tinder is reason enough to quit Tinder. But while icky messages and dates with guys who turned out to be jerks had motivated me to delete my account in the past, straight-up discrimination has me removing the app from my iPhone this time around.

I’d already been thinking of quitting again — a guy I’d met online had unsolicitedly texted mere hours after we’d hooked up to tell me that he’d be embarrassed to date someone my size, and I just wanted to stop even looking at more dudes who could turn out to be so brutal — and yesterday, I was telling Rachel that I was thinking of doing so. It was then that she said, “Probably for the best,” and sent me a link to an article that had just gone up on Mashable, about how Tinder is rolling out a not-free version of their precious service called Tinder Plus. The headline: “Tinder launches premium service that costs twice as much for people over 30.” 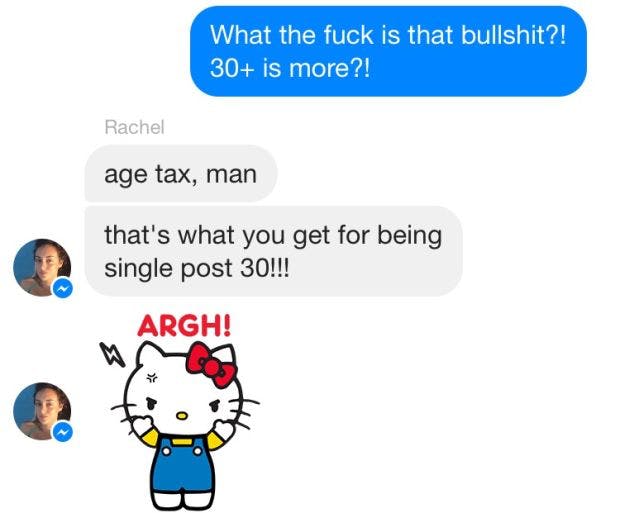 The angry Hello Kitty was animated, by the way.

Karissa Bell reports in her Mashable article, “The dating app is officially launching its suite of premium features, the cost of which vary based on how old you are. In the U.S., users under 30 will pay $9.99 per month, while those 30 and older will pay $19.99 for the same service.”

Because I would never actually pay to use Tinder, even if I stayed on the app, I would be missing out on premium services like “unlimited liking capabilities” (something that was previously available to everyone), being able to undo accidental left swipes (it does suck to inadvertently reject someone just because you’ve gotten into the hypnotic rhythm of “nope”-ing people), and looking for potential dates in any part of the world, even if you’re not there at the moment. I can live without these perks, but now that I know that they think it’s OK to charge people over 30 more for the very same extras, I think I can live without Tinder altogether.

For the ever-more-rapidly expiring life of me, I cannot think of a justifiable reason to charge people who aren’t twenty-something twice as much. Is it a jab at people who are “still single” in their thirties, as Rachel facetiously implied? Do they think we’re more desperate and, therefore, willing to spend more money?

ABC News asked Tinder why they’re charging us Olds double what they’re charging those who have been on this Earth less than 11,000 days. Here’s the utter twaddle their VP of corporate communications, Rosette Pambakian, replied with: “Younger users are just as excited about Tinder Plus, but are more budget constrained, and need a lower price to pull the trigger.”

Oh, so the lower price is a hardship discount! I get it now. My income definitely doubled the day I turned 30, so it makes perfect sense to charge me twice as much as what they would have when I was 29. NOT! (Sorry, but I really wanna bring back “NOT!” Solid proof I’m over 30, I guess.) 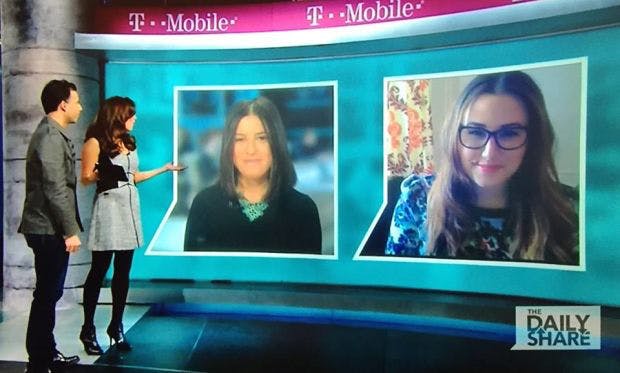 Here I am talking about Tinder with absolutely no hostility in my voice on HLN’s “The Daily Share” a few weeks ago. I would not be so kind today.

The cost is avoidable, so it’s not like I’m pissed off because Tinder’s going to take $20 from me against my will; I’m pissed off because it’s just flagrantly discriminatory. I like to think I’d be just as offended by this business decision if it didn’t potentially affect me. For example, I’ve never gone to a bar’s “ladies night” even though I might benefit from it, because I think it’s unfair to charge dudes more for the same drinks. (Now that I’m quitting Tinder, though, I may need to look into those.)

Although it doesn’t really stick it to Tinder to quit the free version of their service, I still feel like it’s the right thing to do now that they’ve sent the message that they think it’s cool to gouge people based on their age. And perhaps if enough of us Methuselahs stage an exodus, Tinder will take notice and charge everyone the same thing for Tinder Plus.

Not that I’d ever spend even the under-30 price on Tinder Plus. I’d rather put the money towards a bra.

This article originally appeared on xoJane. Reprinted with permission.