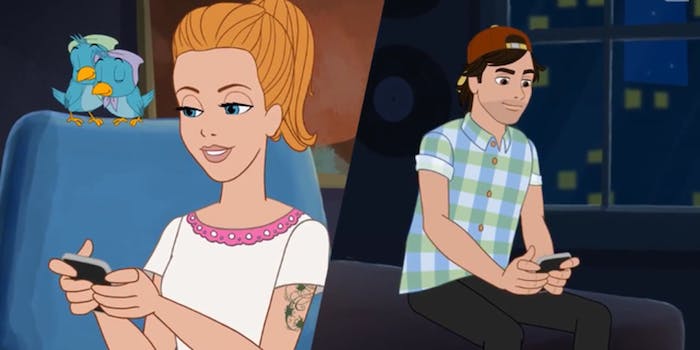 ‘Tinderella’: The modern-day fairy tale of hooking up perfectly

In the end, she doesn’t get a glass slipper, but she does slip out in the middle of the night.

Tinder’s great for meeting your Mr. Two Miles Away, but is it really the place to meet your Prince Charming? College Humor thinks so. They spoofed the phenomenon of the hookup app by left-swiping Cinderella into 2014.

Tinderella: A Modern Fairy Tale tells the story of a young woman looking for love in all the right-swipe places, and using Tinder to find her dream guy for the night. They have an instant connection, rendered in romantic digital text (“Sup” and “Hey”), and proceed to meetup at the “ball.” In the end, she doesn’t get a glass slipper, but she does slip out in the middle of the night. Because Tinderella is an independent woman and she ain’t got time for that.

College Humor just joined forces with Electus Digital to bring original programming to TV and the big screen, and they’re aiming the College Humor series Jake and Amir for TBS. Maybe Tinderella will be next. Would watch.