Dudes: Are you being catfished on Tinder? You might be! The great white hope of Tinder was that there would be no chance of someone catfishing you—after all, your Tinder account is linked to your Facebook. Unfortunately, spambots and people with low self-esteem seem to be an extremely motivated bunch.

The annals of Reddit are filled with tales of forlorn boys who have been burned by fictional lovers, stood-up dates in full panic mode, fellows complaining that their match was heavier than she appeared, and guys simply afraid of showing their privates to bots. These are their (sad, sad) stories. 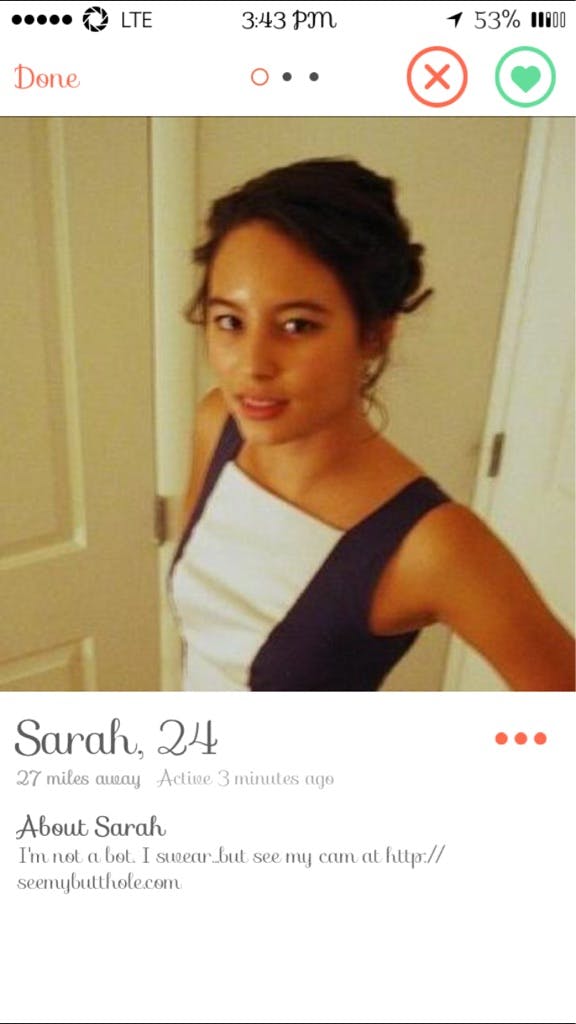 A redditor named jojobabycarrot posted a story on Tuesday about his experience with a woman purporting to be Asian, who appeared to be totally down to hook up. When they met, however, she turned out to be “100 percent Caucasian” with facial piercings and tattoos. She also was prone to pretending her hands were guns and making shooting noises, which probably should’ve been a warning sign in itself.

The douche who had it coming

One of the chief gripes people have about online dating is that their dates look nothing like their profile pictures. So of course there are tales like this one from a now-deleted account, in which the author is shocked to have met a girl who “looked a decent bit worse in the face.” He had to pay $100 to get her friends into the club on their group date because of “how grotesque” they were. Don’t worry, he got his just desserts, in the form of what most medical professionals refer to as “whiskey dick“:

On the more pathetic end of the spectrum, there are a few stories from guys who were curious about Tinder and decided to join as a catfish. What usually happens next is straight out of a ’90s romantic comedy: The catfish inevitably falls in love with his victims, and then he wants to go legit. When he decides to tell the truth, the outcome is never pretty. But one guy on r/Tinder has some pretty clever ideas for how to get out of a catfish conundrum that he created:

-Tell her I accidentally catfished her and actually like her

-give her my number and or snapchat, and telling her that I look like a slightly less attractive guy than the profile but am still pretty cute and she can find out for herself if she wishes.

-Finish by admitting that I know what I did was really creepy and I completely understand if she unmatches me, but I would love to have a chance and go on that date.

Good luck with that, buddy.

The shy boys who aren’t ready for bot love

Sadly, there are tons of posts from young guys who are worried they are the victims of a catfishing scam because girls simply want to see their nudes. This thread, “Girls first reply to my message was to ask to see my cock?,” perfectly illustrates how that whole exchange goes down.

Is this normal on tinder? I said no, but considered saying you can see it, touch it, and feel it when we meet to keep convo going n assess situation more, but made decision to say no cos bottomline it could be anyone that receives it, could be some girl out cock pic collecting to put online etc or could be a catfish etc. But then she replied Ok. And I started thinking maybe what if she was a horny nympo dtf with no chase. Few girls in past few days have initiated sexual talk as their first reply to my opening message but none ask for a cock pic.

The couple who banged several times

But maybe these lost, catfished souls should be optimistic. This one dude was sure he was going to be the next Nev, but the pair ended up “banging.” Just so you know, it wasn’t one bang. The banging happened—wait for it—”several times.”

One time I went out at 2 am to meet a girl at the corner of a street where all the bars were closed/closing. I was so terrified by her eagerness to meet up so late that I brought a single credit card, my ID, and one house key. Turned out she was real and not a gang of teenagers waiting to rob me as were my worst fears. We banged, several times, and have met up a few more times since.

Love is patient, love is kind. Love is Tinder.