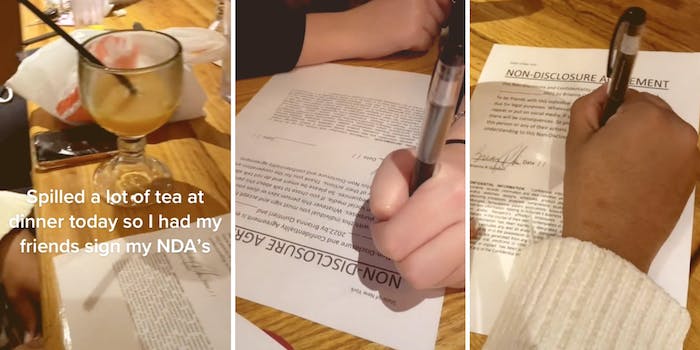 ‘They’re not your friends if you can’t trust them’: TikToker makes friends sign NDAs before sharing gossip, sparking debate

'Why go through the trouble?'

In a viral TikTok video, one user made her friends sign non-disclosure agreements (NDA) before she shared gossip, causing controversy in the comments.

“Spilled a lot of tea at dinner today so I had my friends sign NDAs,” TikTok user @breezyqbaby wrote in the text overlay of the video.

@breezyqbaby For those who thought I was joking. Signed and sealed. #nda #whatstea ♬ Pennies From Heaven – Remastered – Louis Prima

The video shows five friends around a table signing the TikToker’s NDAs. The clip has received over 3.3 million views.

“For those who thought I was joking. Signed and sealed,” the TikToker captioned the post.

Several users in the comments questioned why she’s requiring her friends to sign NDAs.

“If you need friends to sign nda why are they still your friends!!” one user said.

“Who needs an NDA when you have a frieNDA,” said another.

“First, Those are way too many friends you spilling tea to. Second, they’re not your friends if you can’t trust them !” said a third.

One user suggested she shouldn’t spill anything if she needs an NDA to keep it quiet. “Why go through the trouble ? why don’t you just not tell them anything?” they said.

Others questioned the legitimacy of the NDAs her friends signed.

“It’s not a real nda if it isn’t drawn up by a lawyer and it’s notarized. So they can still tell whom they choose,” one user said.

“Not real NDA unless notarized,” said another.

Still, some people were into the idea and asked the TikToker to share her NDA template.

The Daily Dot reached out to user @breezyqbaby via Instagram direct message.