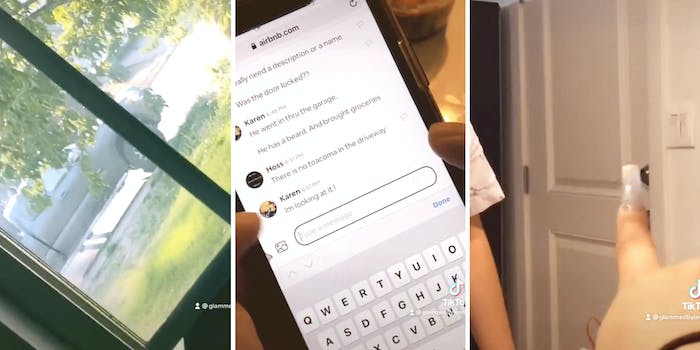 ‘We don’t feel safe, especially if you aren’t sure who is in the house’: TikToker shares video of ‘scary Airbnb experience’ after stranger enters, claims to be a tenant (updated)

The host asked the guests to interact with the stranger.

One TikToker’s “scary Airbnb experience” went viral after an unexpected tenant claiming to rent out the garage entered the home.

TikToker Jennifer Enriquez @glammedbyjenny_ shared a clip of an unknown man entering the garage of the Airbnb that she had rented with several other tenants. By Wednesday, the video had reached 1.7 million views.

The video also included footage of the messages between Karen, one of the tenants in the group, and the host. The tense exchange sparked discussion in the comments.

After the group reported the incident via the Airbnb app, the host maintained that the garage was not rented out and told Karen to ask the man to “message whoever he booked with.”

Karen said the man had a key that he used to enter the property and said he was a tenant. The host replied, “I wish you had contacted us prior to letting them in,” and told Karen to ask the man to call them.

“I don’t want to talk to him,” Karen wrote. “We don’t feel safe, especially if you aren’t sure who is in the house.”

Commenters encouraged the group to report the exchange and criticized how the host handled the situation.

User @mujerdemuerte wrote, “Please tell me y’all got a refund of anything because what the hell kind of Airbnb host reacts that way.”

“Not the host catching an attitude. And asking you why you let them in when you literally said they had a key,” another user added.

Enriquez said the man was eventually identified as the tenant of another room on the property that wasn’t disclosed on the original listing.

“Long story short, there was an extra room in the back that we were NOT aware about,” Enriquez later clarified in a TikTok comment. “The host never mentioned someone else would be staying here. Also, it was never mentioned in the house description before we booked it.”

The Daily Dot reached out to Enriquez via Instagram DM and TikTok comment and to Airbnb via email.

Update 7:55pm CT, Jan. 20: In an email to the Daily Dot, a spokesperson for Airbnb said the incident described in the TikTok took place in July 2020. The spokesperson also said when the TikToker made the reservation, the listing noted that there was a “separated guest suite in the back of the house.”

The host also notes on their page that the property has a “shared backyard.” The listing, located in Shasta Lake, California, has an average of 4.45 out of 5 stars from over 160 guests who left reviews.