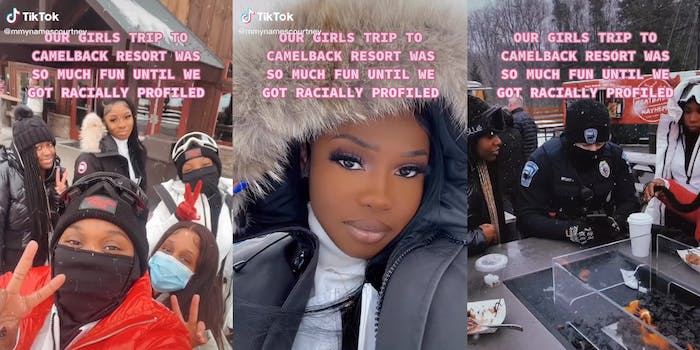 'Just because the guy is Black and we’re Black doesn’t mean we know him.'

In a series of viral videos, TikToker Courtney (@mmynamescourtney) says she and a group of friends were “racially profiled” after going snow tubing at the Camelback Resort in Pennsylvania. Courtney says officers accused her friend of stealing a pair of gloves and goggles from a resort gift shop after identifying a Black, male suspect.

The first video shows a police officer talking with Courtney’s friend, but there’s no context of what’s being discussed.

Courtney explains that the group had decided to grab some refreshments after their snow tubing venture when one of the friends was stopped by a police officer. Making sure that things weren’t escalating, the TikToker decides to check on the conversation and hears the officer tell her friend to “give the merchandise back.”

The following day, @mmynamescourtney posted a sequence of storytime videos breaking down what had transpired.

Courtney says prior to snow tubing, she and her friends stopped by a ski shop to purchase the items. In one video, Courtney shows the receipt for both items.

Courtney said despite the receipt, the officers did not believe the group because the women were seen on a security camera with a man who allegedly shoplifted. It is soon revealed that the man who exited the store before or after Courtney’s group was also Black.

Courtney’s friend accuses the officers of being racist because they didn’t stop any white people leaving the store behind the man.

“So because we left the store and a man that probably left the store before or after us, that means that we stole?” Courtney said. The officer said yes, according to the TikToker.

Courtney then stated, “There were other people in the store, Caucasian, but they were also in the store and they also left behind us, so did you ask them if they knew this man?” Per Courtney, the officers said they didn’t ask others.

“Just because the guy is Black and we’re Black doesn’t mean we know him just because we all walked out at the same time,” Courtney said.

Courtney said due to the fear that they would be arrested, someone from the group took a picture of one of the officer’s phones that had a picture of the man who allegedly stole and another woman beside him.

The police officers believed the woman standing next to the man to be part of Courtney’s group. The TikToker posted photos of each person in her group and then compared it to the original photo, showing that the possibility of confusing the two people was far-fetched.

“Don’t go to the fucking Camelback Resort, especially if you are of color,” Courtney says in one video. “It’s not worth it, it doesn’t make sense, and they’re fucking racist.”

One TikToker asked how the situation ended. “We all knew our rights so we walked away after showing them it wasn’t us,” Courtney commented.

The Daily Dot reached out to Courtney via direct message on TikTok, the resort via email, and the Pocono Mountain Region Police Department via Facebook.