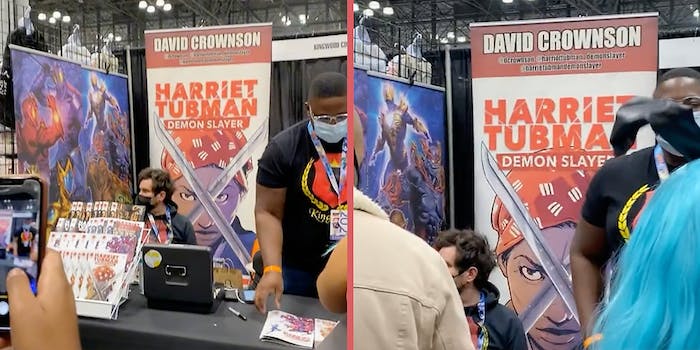 The 5-second video, posted by @thereaijasonderulo, shows a white man and a Black man working at a booth with a banner behind them advertising Harriet Tubman Demon Slayer. The video zooms in on the white man while the popular “Ain’t no fucking way boy” audio by TikTok user @5starrr.lando plays.

Many commenters felt that the comic was disrespectful. They found it especially problematic that a white man could be profiting from Black trauma.

“I swear white ppl will never stop profiting off blk pain and struggle,” wrote @sishais. “Is any money going to the blk community besides that blk dude there?”

“That Black dude” is David Crownson, the author of the comic. Some commenters said that Crownson being Black made the situation worse, as he should have known that the concept was a “no-no.”

“That shit looks disrespectful and stupid,” wrote @jojohellxx. “Idgaf if a black dude made it.”

Other commenters felt there was nothing wrong with the comic. Several found the concept intriguing and expressed interest in watching an animated adaptation of the comic. One user even wrote that people should be happy because the comic would get kids interested in history.

“This is a way for the younger generation to get interested in history and learn about historic figure like Harriet Tubman and learn of the past struggles for the black community,” @wolfman559f wrote.

Several commenters also made a connection between the comic and the 2010 book and 2012 movie Abraham Lincoln: Vampire Hunter. Some argued that if Lincoln could hunt vampires, Tubman could slay demons. Others argued that both concepts were silly.

The Daily Dot reached out to @thereaijasonderulo and David Crowson via TikTok comment.

Update 11:11am CT, Dec. 28: David Crownson, the author of Harriet Tubman Demon Slayer, gave context to the video in a phone interview with the Daily Dot.

“The white dude in the video is my childhood best friend,” Crownson said. “He was just there to assist me with carrying my books, carrying my banners, and just assisting me with the convention.” Crownson’s other two assistants, whom one commenter called white, are also Black.

Crownson said the premise of Harriet Tubman Demon Slayer is that Tubman is an “all-powerful ninja warrior” in addition to being the historical figure people are familiar with.

“Basically, white slave owners can’t stop her because she’s an all-powerful demon slayer, so they team up with demons—which is vampires and werewolves—to stop her,” Crownson said.

The comic started out as just a “fun idea” that Crownson made for himself until former President Donald Trump was elected. After the election, Crownson said, he went grocery shopping and saw a woman wearing a hijab and being “interrogated” by a group of white men who were being “blatantly racist.”

“They’re doing this because now they feel emboldened because Trump is now president,” Crownson said of his thoughts at the time. After that experience, writing the comic became his “catharsis of how to deal with this new president.”

Crownson said he did not intend to be disrespectful when making the comic, but he understands the negative response some commenters had.

While he understands people’s apprehension, Crownson notes that people did not carry the “same energy” for Abraham Lincoln: Vampire Hunter and Pride and Prejudice and Zombies. He also feels that people should read the comic before they pass judgment.

“From what I’ve noticed, once they read the first issue, they’re like ‘Oh, this is taking it seriously and still treating it as a biography, like a straight-up biography, and having a little bit of fun with history,’” he said.

Crownson said he sees his supernatural touches as a way to celebrate Tubman and portray her as a superhero. He did extensive research before writing the comic to get “underneath who Harriet Tubman is as a human being.”

“One thing that helped me with writing this character is the fact that Harriet Tubman had a sense of humor,” he said. “She was really funny and people kind of skip over that.”

For the commenters who were onboard with the comic and expressed interest in seeing it on-screen, Crownson has good news. He is working with Prentice Penny, executive producer and writer of HBO’s Insecure, to adapt the comic into a TV show.

“It’ll be an edgy, unapologetically Black-created show,” he said. Fans can expect announcements on where the show will air in early 2022.