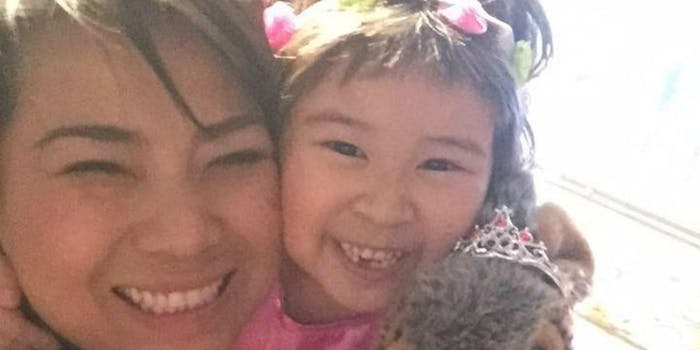 'I'm not trying to be mean. I just want everyone to be friends.'

In the history of this civilization, there are a handful of speeches and pep talks that make us believe in ourselves, show us we can go forward into that big world and succeed, and motivate us to become the people we always believed we could be.

Martin Luther King’s “I Have a Dream” speech, for instance. Or Winston Churchill’s “We Will Fight On the Beaches” motivational. Or William Wallace’s “They Will Never Take Our Freedom.”

Now, let’s welcome into that exclusive club this 6-year-old’s talk to her divorced mother about why she should be friends with the girl’s father. Because Tiana’s soliloquy is amazing.

The backstory from her mother on Facebook is that after she arrived home from a badminton outing, she opened the garage door only to discover that her shoe rack had spilled more than 50 pairs of her shoes all over the ground. Tiana’s father…

… came out yelling to me that my shoes rack was suck!! Complaining I bought a cheap shoes racks good for nothing!on and on..And I told him to just move get out of the way if he doesn’t want to help then go away!as I get upset so didn’t make it sound nice and friendly. But it’s not a fight.

Tiana offered to help me put up shoes on the rack That I rebuilt after all it done I am going to move the car in but Alfred, [the father] offered help to tight up some lopes to help stabilized while he do that……I think she saw her dad helping me and then start talking..

Tiana said in front of both of us, Why you guys don’t try to be nice to each other… Like a friends helping each other don’t get mad and be happy!!

I was stunned by it! She is teaching me!!

And then we sit down only me and Tiana And this is part of it as didn’t think she could think like that!! She brought me tear and feel guilty

Let’s quickly break down the speech and showcase why it’s so deserving to become the greatest ever made by a 6-year-old.

1) This speech appears to be completely off the cuff

Even the best speakers reading off the most-efficient teleprompters still can’t be as effective as if they speak simply—and grandly—from the heart. As far as I can tell, Tiana had no written notes, and there likely wasn’t a teleprompter in the house (nor likely anybody to input her speech and run it through while the first-grader was talking). But there was spirit in her words. And there was heart. She couldn’t have written a better speech. Literally. She literally could not have written a better speech.

2) ‘I’m not trying to be mean. I just want everyone to be friends’

Clearly, this was the main point of her monologue. She sprinkles in this phrase a couple times during her speech. Makes it that much more effective each time.

3) She brings up monsters

And with another speaker, this could have been a scary image. But Tiana comforts us even as she lectures. She knows monsters ruling the world (and possibly eating us) is a possibility. But she also realizes that humans who are nice to each other would never let that happen.

4) It’s a little thing, but the brief pause Tiana makes at the 2:26-minute mark was sublime

Giving a speech is giving a performance, and by waiting an extra beat (and looking to the side to allow herself to break eye contact for just the briefest of moments) before finishing her thought was the mark of a truly effective public speaker.

Or maybe this was all just a little girl who badly wants her parents to stop fighting and be friends so that her world can be full of pink bunny shirts and toy guitars for as long as possible. Either way, Tiana is an inspiration.