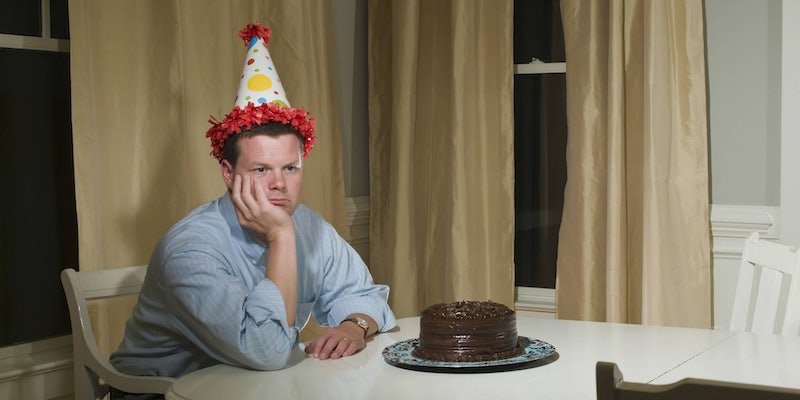 Why does this keep happening?

Last year, 18-year-old Hallee from Maine was left crying into her birthday cake because not a single person she invited showed up to her party. “’My daughter was finally wanting to celebrate her birthday with friends, she was so excited and so were we because we were able to give this to her. But then no one showed up,” her mother told the Daily Mail.

WHY ON EARTH DOES THIS KEEP HAPPENING?

Earlier this year, the story of Sad Papaw—a grandfather who planned a backyard grill party for his whole family only to have none of them show—went viral. So did the story of Grandma Magdalene, who threw an art show nobody went to.

In all three instances, the internet rallied to cheer them up: Hallee’s cousin posted her photo to Facebook and is asking people to send her cards and gifts for her birthday this year. This type of viral phenomenon shouldn’t even be a problem in the first place because nobody should be throwing a party where absolutely no one shows up.

So we are here to present you our official guide on How To Make Sure That Party Won’t Go Viral For Sad Reasons.

If you’re throwing a party, it’s obviously important to make sure there are guests. If none show up, that’s absolutely on them (and in the case of Grandma Magdalene, on the library for not promoting the event enough). You should not be throwing a party if you don’t know if anyone will be there. There’s plenty you can do to guard against a total no-show, such as following up with people.

A few days before the party (or whenever makes sense if there are deposits that can’t be refunded), email the invitees or post on the Facebook event page that in order to reserve a space/plan for parking/make sure you have enough snacks, you need a firmer head count. Ask that everybody respond one way or the other, and if they don’t, start making phone calls.

It would certainly be unfortunate if every single person said no. However, by following up and getting that head count, you can cancel if it looks like nobody will be there, and make sure that at least you’re not spending hundreds of dollars on hot dog buns and balloons for no one.

Also, keep in mind the time of year you’re throwing your party. Apologies to all children born on Christmas out there, but if you throw your birthday party on that day, a lot of people are going to be busy. Before you even throw the party, poll your inner circle of friends and family. Are people going out of town? Is there another party that day? Get a few confirmations before you even set a firm date.

Of course, you can do all of this and still have nobody show up, because people are assholes. If you’ve been invited to a party, it pretty much is your responsibility to RSVP. Rules get a little lax for that comedy show the girl you went to high school with invited you and 800 of her closest friends to, but if it’s something like a house party or a celebration for a specific person, say yes or no. At the very least, if your plans really are up in the air, tell that to the host and follow up as soon as you know whether you can make it or not.

This is especially true if you’re a parent and your child gets invited to a classmate’s birthday party. If that kid has been a bully, no, your child doesn’t have to go, but otherwise we’ve all been through the tradition of going to every kid in class’s party to make sure no one feels left out. Teach your child the art of showing up and doing something nice for someone else, even if it’s just to say hi, give a card, eat a piece of cake, and leave.

Of course, things happen. People fall ill, mix up dates, and get stuck in traffic. But save for a citywide norovirus outbreak or a typo on an invitation that sends everyone to off-brand theme restaurant “Chunk R. Cheese,” there is no reason a party should be thrown where nobody shows up.

Please, do your part to keep viral stories like this from happening in the future.