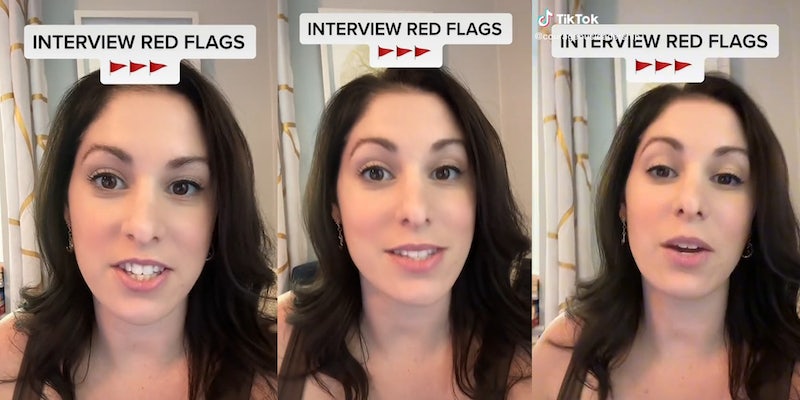 ‘If you see these, beware’: Leadership coach shares 3 red flags you need to look out for in a potential new boss

'One time an interviewer left me waiting for 20 min and didn’t even apologize.'

A woman went viral on TikTok after sharing the three red flags you need to watch out for during an interview with a company.

User Robyn Garrett (@courageousleadership) is the CEO of a company called Beamably and posts business-related content and advice. In the clip, Garrett shares with her 58,000 followers the signs of red flags during an interview with a prospective new boss.

“Number one is if they’re late,” Garrett says. According to Garrett, if the boss is late and flustered, this is a sign that “you’re walking into a chaotic environment.”

The second red flag is “if there’s no back and forth in the conversation.” Garrett elaborates on this, how in the past, job interviews were equivalent to an “interrogation” and if it feels that way, that it’s a sign of unequal partnership.

The third sign is if the interviewer “can’t give clear succinct answers.” Garrett explains how the interviewer should know, “exactly what they’re looking for” and “exactly what success looks like.” However, if they don’t, “they haven’t done enough planning for this role” and that means “you’re walking into a trap.”

Garrett advises viewers, writing in the caption, “If you see these, beware.”

The video has been viewed over 17,000 times since it was posted on Sept. 27, with many people agreeing with Garrett.

“I rejected like five jobs like that this year for this exact kind of thing,” one viewer recounted.

“Agreed. I just turned down a position that sounded amazing. I had 5 questions for them at the end and they could only answer 1,” a second commented.

“I wish I saw this years ago.my first job after graduating my interview with my then future boss was an hour late and got the job…I learned my lesson,” another agreed.

However, there were other people who disagreed with Garrett, mainly on the first red flag.

“I think we should be careful about the “late”. As a leader working remote can cause outages, I’ve been late 2 minutes due to internet connectivity,” a second wrote.

“Being from the IT field, I can let being a few minutes late slide. There are times when chaos just happens – i.e. a server failure or network outage,” one user said.

Some people even added their own red flags they’ve seen during interviews.

“I walked into an interview and they didn’t know my nor name had my resume handy… instant red flag,” one shared.

“I had an virtual interview where they turned off cameras and then scolded me for not wanting to relocate. Red flags,” a second commented.

“I had a red flag where the recruiter didn’t actually seem to understand what the job was about,” another stated.

Update: Oct. 7, 2022, 2:28pm CT In an email to the Daily Dot, Garrett wrote she had seen these red flags many times over the years in chaotic work environments. “Employers act like this kind of disrespectful behavior is normal, but it isn’t and we shouldn’t accept it,” she wrote. “Workers deserve respect. For years, bad bosses have acted like everyone is replaceable and now they’re shocked that people are leaving.”