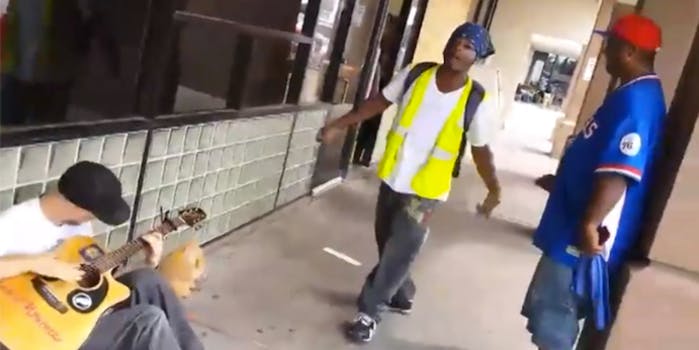 The universal pull of music is strong.

This video clip was allegedly uploaded to Facebook by Jaime Tatos Maldonado, who offered this description:

“I was walking to kroger and saw this guy playing a song. It sounded good so I decided to record it. By the end of the song three guys started jamming. This truly is music in its simplest form. It really reminds of the Austin days. Enjoy.”

The busker starts the song solo, but slowly another man joins in, and adds the perfect accompaniment. Then, a third guy, who looked to be walking into the Kroger, gets drawn in. It’s not entirely clear if this was a cover or an original, but if it’s the latter, this clip is even more impressive.

There will of course be claims this video was staged, but the universal pull of music, even among strangers, is a strong one. Watch, refresh, repeat. (And look out for Jimmy Kimmel in the background.)