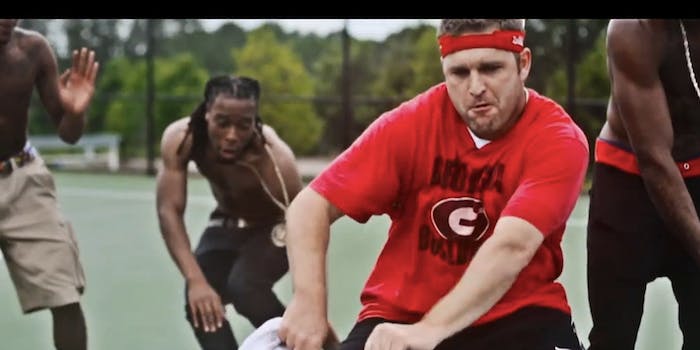 The stomach-turning song and its accompanying dance are being aped by everyone on Vine, from birds to babies.

Earlier today, the hashtag #ThotWalkGame was trending on Twitter. If you clicked on it, you’d have seen a vine of Joanna Rohrback, a.k.a. the “Prancercise Lady,” performing her signature workout to a hip-hop song called “Thot Walk”:

It’s a pretty great vine, mostly because the song is incredibly catchy and the Prancercise Lady is funny. But what, exactly, is a “#ThotWalk,” and why was it trending?

To answer this question, it’s helpful to be under the age of 25, and thus know what a “thot” is. (It stands for “That Ho Over There,” and is a slang term for a slut or a prostitute. Charming!)

And what, exactly, is a #ThotWalk? According to Urban Dictionary, it’s a dance you’re supposed to do when you see a “thot” walking down the street. The phrase and the accompanying dance—which looks sort of like someone attempting to leap over puddles in slow, rhythmic motion—stems from an eponymous song by Atlanta-based rapper Kayleb with Yung Cyph and John Boy.

The original track has had more than 650,000 views since it was posted on YouTube in April, and an official video for the song recently premiered on the website WorldStarHipHop.

The lyrics describe a typical “thot,” “showing off her body on her Instagram/just to get 100 likes on her picture,” and “doing anything for attention/on Twitter just to get a mention.” The lyrics go on to describe a typical thot “by the way she stands,” urging her to stop posting photos on social media and “let that kitten rest for a couple nights.”

Despite the slut-shaming lyrics—or more likely, because of said slut-shaming lyrics—the track and the accompanying dance are hugely popular on Vine and Twitter. If you look up the hashtag #thotwalk, you’ll find 500+ vines of people performing the dance, or looping the audio over vines of animals walking like a “thot.”

Some people are even vining their kids doing it.

With the exception of one commenter on WorldStar, it doesn’t seem like anyone is taking the time to point out just how deplorable this trend actually is. “This is complete nonsense,” the woman writes about the video. “Not only is it degrading women lyrically, it is primarily targeting black women and its a damn shame. I can’t with America anymore.”