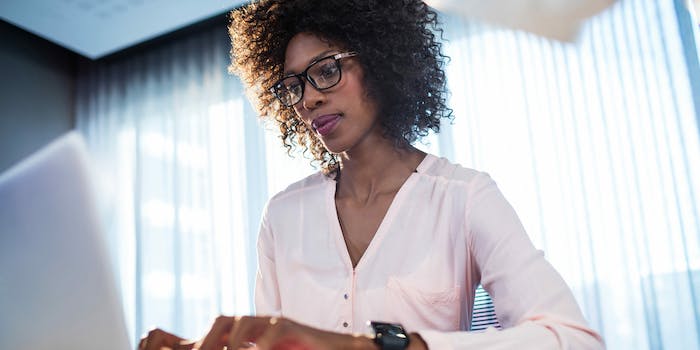 #ThingsOnlyWomenWritersHear shows the subtle sexism faced by women in writing

Men would never receive these comments.

Has John Green ever been asked how he balances writing and raising his kids? Or David Sedaris been labeled as a “confessional” writer? Or Stephen King questioned on his ability to write horror and science fiction?

That’s the premise behind #ThingsOnlyWomenWritersHear, the trending Twitter hashtag detailing the painfully subtle and abrasive questions or comments that women in writing and publishing are confronted with about their work, words that male writers somehow magically subvert.

With these comments, women are told that being a female writer is unusual, different, “other,” and is either a side job done while the children are asleep, or a job they’re incapable of doing entirely, just because they’re women.

English writer Joanne Harris, author of novel-turned-film CHOCOLAT, started the hashtag on Monday morning amid a different Twitter thread on dealing with rejection as a writer.

“All the writers I know who have given up have done so, not because they weren’t good enough, but because they couldn’t take rejection,” Harris wrote.

In response, another Twitter user suggested that it was the inability to get paid while trying to raise a family that kept someone from writing.

Or could no longer justify the time spent for zero $ when trying to raise a family.

Harris and the other Twitter user agreed that it can be done—they’ve both been able to write while raising kids and working full-time—but the other user still felt writing was hard to justify if a writer’s rejection was getting in the way of getting paid. Which is something male writers with families aren’t asked to do—justify their writing despite not making money while supporting a family.

Like many male-dominated careers, men’s careers as writers aren’t attached to their identities as family men, whereas women’s careers, especially in jobs that are less lucrative to help “support a family,” are seen as secondary to family priorities. These jobs, being a writer, an artist, a filmmaker are “hobbies” for women—opportunities for some “extra cash” with a “passion project” and aren’t seen as genuine careers.

So with that, Harris launched #ThingsOnlyWomenWritersHear to show how women writers aren’t taken seriously, or are questioned for the subject matter they write about, or are mistaken for their own publicist instead of the writer themselves.

Men sacrifice interests for family. That's a fact. I think it's a mistake to believe otherwise.

I don't know of any male writer who has been criticized for neglecting his family life, or told he's being selfish for wanting to write.

However, I've heard many women writers criticized for the same thing, or being asked how they "juggle" their writing time and their family.

Perhaps we need a hashtag: #ThingsOnlyWomenWritersHear.

Some writers described how their occupation and work are always tied to their gender. They’re women, so they’re women writers, and they write for women, right?

"Sounds like chick-lit." – how everything I've ever written has been described to me at some point or another.#ThingsOnlyWomenWritersHear

Them: "Can boys read your books too?" Me: "No, they are printed in girl ink." #ThingsOnlyWomenWritersHear

Male radio hosts say they love my books, then once we're on the air they say I write "great books for women." #ThingsOnlyWomenWritersHear

"Why don't you write female protagonists? You're not a guy." I'm also not a sorcerer but I write them too. #ThingsOnlyWomenWritersHear

Or how their gender makes them predisposed to subvert certain stereotypes about being a woman.

"Ugh, your main character is so UNLIKEABLE. Can't you make her more, I don't know, likeable?" #ThingsOnlyWomenWritersHear

Others described how they’re always told their work will never make them actual money.

"But what's your JOB?" #thingsonlywomenwritershear

Or that, as women, their work is hugely unexpected or inappropriate.

"I don't read many female authors. I only read [literally any genre but romance, regardless of the fact that women write in every genre]."

#ThingsOnlyWomenWritersHear "I'm surprised a woman could write military scifi so well!" You've never talked to female soldiers, have you?

Many women sounded off that having a feminine sounding name even puts them at a disadvantage for having their work read, and that they’ve even been told to change their pen name.

"Have you considered using a pseudonym so people don't know you're a woman?"

Because it's 1842 & I'm a Bronte. #ThingsOnlyWomenWritersHear

"Are you going to hide your first name with initials so people won't know you're a woman?" #ThingsOnlyWomenWritersHear

And a few even shared that being a living, breathing woman in the flesh seemed to distract people or confuse them about their writer occupation.

(When traveling with a male publicist) "You must be the publicist." #ThingsOnlyWomenWritersHear

On Tuesday, the hashtag #WhatWOCWritersHear joined the conversation, with writer L.L. McKinney showing that female writers of color face similar but more intense bias about their work. Either their characters are too racial for the book, or too racial for the publishers, or too similar to another character of color from another book.

"this is too similar to [other woc author] novel in our house" tho really, no. but we can have 100 white teen road trips #WhatWoCWritersHear

"We already have *insert 1 WOC on their list* so our line already is covered w/yr kind of story #WhatWocWritersHear#WeNeedDiverseRomance pic.twitter.com/XmZHVHxFtH

Some writers have even been deterred from writing characters of color—because only white characters are relatable, right?

Having non white characters is alienating. Why does it matter what race they are anyways?? #WhatWoCWritersHear

Can she have an easier name? I just think readers won't connect with such an exotic name #WhatWocWritersHear

Or writers have been told that they’ve written characters of their own race incorrectly. Or they’re the wrong kind of diverse.

"Black people don't do that." – said by a white editor #WhatWocWritersHear

Them: "I adore interracial couples in lit!"
Me: *puts brown and black people together*
Them: "No, not like that."#WhatWoCWritersHear

Some writers have even been mistaken for other writers of their same race.

I loved your book! *names book of another author of the same race* #WhatWoCWritersHear

Women writers, particularly women of color, don’t get their just due in writing and publishing, especially considering the BS they encounter. However, it seems the only way to change the narrative and normalize female authors is for women to continue “breaking barriers” and share these stories—as long as it’s not the only thing they’re writing about, of course.