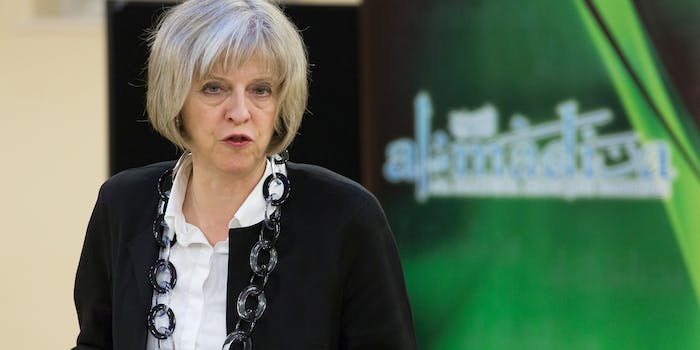 Because bloody difficult women like to 'get shit done.'

Earlier today, U.K. Conservative politician Kenneth Clarke described Tory leader Theresa May as a “bloody difficult woman” on camera in what he thought was a private conversation.

So leave it Twitter to instantly reclaim the term as shorthand for taking no crap. Soon the hashtag #bloodydifficultwoman was trending.

Proud to be a #BloodyDifficultWoman
Proud to support a few ..
Proud to watch them RUN IT.#KenClarke

I am a #BloodyDifficultWoman, but then 'bloody difficult women' like me get shit done, innit? pic.twitter.com/7TXH6ThqQR

If we can contrive to shove Ken Clarke into a Tardis, there's a #BloodyDifficultWoman or two who'd like a quick word pic.twitter.com/ID8eg6aWk7

Women in the U.K. were proudly proclaiming themselves bloody difficult, celebrating the likes of Maya Angelou, the Williams sisters, and Rosa Parks, who got stuff done rather than be compliant. And more than one tweet has pointed out the sexist double standard which means powerful men are rarely, if ever, described as “difficult.”

I would love to know what the 'male' version of a #bloodydifficultwoman is? Someone who speaks up/is assertive? Oh.. https://t.co/hQpg8G3S96

Current Home Secretary Theresa May is one of five candidates positioned to fill the role of prime minister, after David Cameron resigned in response to Brexit. The media has already been criticized for tainting her campaign with sexist remarks—a Times U.K. profile of May last Friday described a “warm side” to the “ice queen” and depicted her as a closet homebody who secretly loves cooking.

Today, in an exchange with fellow Conservative Malcolm Rifkind captured by Sky News, Clarke appears unaware he is being filmed, and cackles, “Theresa’s a bloody difficult woman, but you and I worked for Margaret Thatcher!”

(Note: Britain’s first and to-date only female prime minister, Margaret Thatcher, was dubbed “The Iron Lady” for her no-nonsense demeanor.)

While May is seen by some as a controversial leadership choice because of her questionable record on human rights, Clarke’s comments have inspired many more to declare solidarity with her.