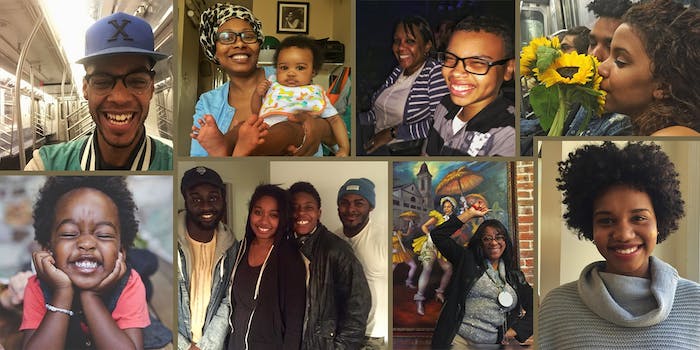 How the Black Joy Project is helping activists deal

Meet Kleaver Cruz, the 27-year-old writer behind #TheBlackJoyProject on Instagram.

Black Lives Matter has pushed the national conversation on race—but the trauma and pain behind the fight against systemic racism can weigh heavily on black organizers and the communities they serve.

This was the case for Kleaver Cruz, a 27-year-old writer and community organizer at Black Lives Matter: NYC. A few days after Thanksgiving, he woke up deeply saddened, physically unable to move.

Cruz found the remedy to his sadness after taking a photo of his mother smiling and enjoying a piece of art. He loved the picture so much that he posted it on Facebook—with more joyous photos of black people smiling to follow.

Soon after, he formalized a social media campaign called #TheBlackJoyProject on Instagram.

["The purest kind of joy. The simple fact that we have to define it means it's hard to find. So when we do, it's a 100%."] The "People's Person" and semi-secret singer, Christopher Moncrief, defines #blackjoy for #theblackjoyproject

[“Singing and writing. Taking care of myself brings me joy. Having a morning ritual. Having meaningful conversation with friends and family. Deep conditioning my hair. Staying inspired. Listening to new music and watching documentaries. Reading.”] Aspiring singer and creator of #blacklatinxhistory, Juliana Pache, gives us a glimpse of her #blackjoy for #theblackjoyproject

“It’s the ability to smile [and] even have a moment of enjoying yourself in an environment and in a society that is designed for us to be killed, to be imprisoned, to just not enjoy our lives or to survive,” Cruz said.

“To even enjoy it for that matter to then have moments to enjoy your life is a resistance,” he added.

Yet Cruz hasn’t been impervious to guilt that often comes with happiness. He wants to enjoy his life while also affirming the lives of black people as an organizer—believing there’s room for both. It’s a balance that takes a personal toll.

“That is a form of ‘the work’—whatever that means—is taking care of yourself so you can be good and great for other people,” he said. “So often we’re being asked to give and give and give, but we are giving and we are hurting. … We are not addressing our own pain.”

As a member of BLM: NYC, Cruz said people in the chapter take moments to support one another by checking in with questions like, “How are you actually feeling?”

As of now, Cruz is the one giving. There are no collaborators on the Black Joy Project. Although Cruz likes to solely engage with people directly, he is not opposed to the idea of future collaboration. Either way, he encourages people to immerse themselves in sharing photos of black joy.

“I’m always curious, how do people find me?” Cruz said, acknowledging that he rarely asks people to follow the project. “So I’m pretty sure it’s through searching for black joy, the hashtag.”

[Black joy is being present to the presence of a future generation and knowing that one of its influencers is a Dream that will be realized. Boldly, with smiles and triumph over the chaos that is this imagined nation.] #blackjoy #theblackjoyproject 📸: @sallomazing

The writer thought about creating a black joy blog, but he’s glad the project is a visual representation of what it looks like to be happy and black—noting that smiles are contagious, “even if it’s just for a second.”

“From the people who have reached out to me—it’s been what I wanted it to be [and that’s] to be that moment of pause to think about what makes you happy,” Cruz said.