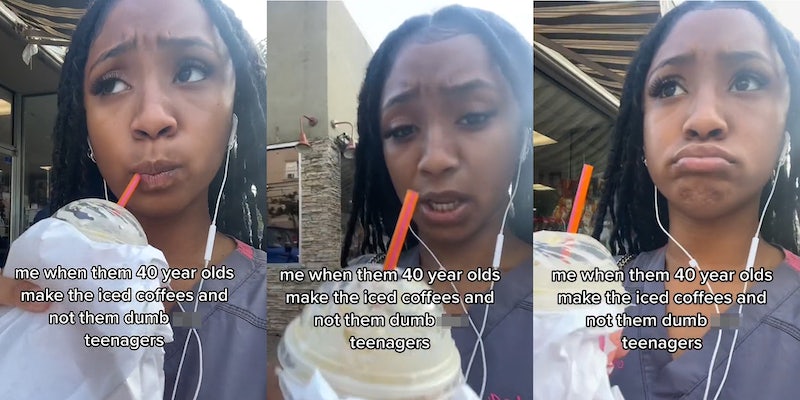 ‘You can taste the lack of effort’: Dunkin’ customer says ‘dumb’ teenagers are bad at making iced coffee, sparking debate

'Starbucks teenagers just be throwing whatever’s nearest into a cup.'

In a viral video, TikToker Zahra (@zahraa.3x) created a divide between teen and older baristas after claiming that adults make better coffee drinks. The video has over 2.9 million views as of Tuesday.

“Me when them 40 year olds make the iced coffees and not them dumbass teenagers,” the overlay text on the video reads.

Zahra is mouthing along the words to a TikTok sound that says, “Mhmm, now that’s what I’m talking about,” while sipping on a Dunkin’ iced coffee.

“Yall dont be making it right sorry not sorry,” she added in the caption.

In the comments section, most users agreed with Zahra’s take.

“You can taste the lack of effort,” one user commented.

“The middle age ladies make the coffees with their SOUL,” another argued.

However, some users argued with the creator’s sentiment.

“Clock in and make it yourself den ho,” one user said.

“Make ya own <3 none of them get paid enough,” another commented.

In an additional updated comment, Zahra asked, “Why are y’all mad??? cus I speak REAL??”

The Daily Dot reached out to Zahra via Instagram direct messaging.