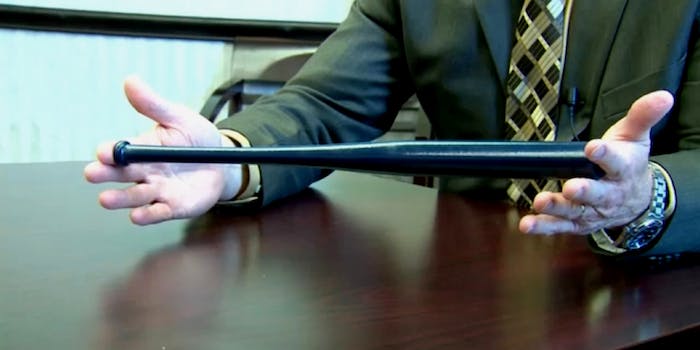 Though mostly symbolic, the bats also serve as a last resort in the case of a shooting.

In response to the Feb. 14 Parkland shooting, a Pennsylvania school district has decided to arm an estimated 500 educators with tiny baseball bats, a gesture that its superintendent has called “symbolic” but will give teachers a “last resort” for fighting back in the case of a school shooting.

Millcreek Township School District, serving a suburb of Erie, Pennsylvania, purchased 600 bats for about $1,800, according to GoErie.com, and distributed them on Monday during in-service training for responding to school shootings. The district’s revised plan include options beyond having a school lockdown.

“The bats are more symbolic than anything,” Superintendent William Hall told the publication. “However, we do want to have one consistent tool to have at somebody’s disposal in a classroom in the event they have to fight.”

The baseball bats are blue and 16 inches long. They will be locked up in each classroom when not in use.

Hall said beyond arming teachers with bats, the district has several other safety initiatives in the works, including a concrete barrier around the high school’s walkway and extra security measures at each entrance, according to Erie News Now. The district has also conducted a survey online to gauge public support for training and arming certain staff members with guns should the measure become legal in Pennsylvania.

“It was about 70 percent to 30 percent that people would favor that, but we’re not really actively planning that right now,” Hall told the network.

Jon Cacchione, president of the Millcreek Education Association, told GoErie.com that teachers have generally approved the upgraded security measures, but will potentially disagree with arming staff with weapons beyond tiny baseball bats.

“The only thing we’re not in agreement with as a group, although, certainly, individual members disagree, is the idea of giving teachers guns,” Cacchione said. “Having said that, we certainly don’t object to a greater presence of armed and certified police officers. But teachers are here to teach, not to be in the line of defense that carries weapons.”