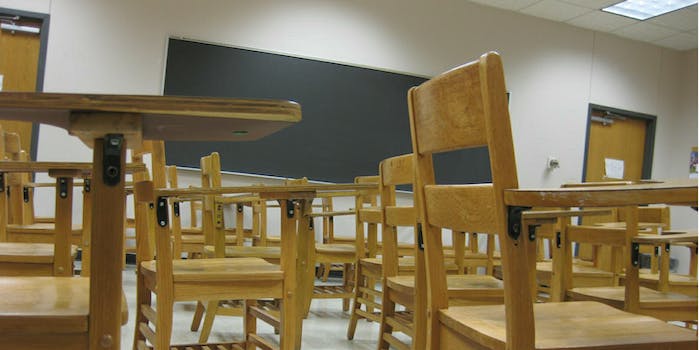 Teacher suspended for locking student with autism inside a storage room

The student was found curled up and crying.

An on-call teacher in British Columbia, Sherri Lee Loewen, was suspended after locking a student with autism inside a school storage room.

An anonymous six-year-old, referred to as “Student A,” was having a temper tantrum when his educational assistant moved him into the storage room. The assistant left the child’s care to Loewen, who proceeded to close the door and lock the student inside. This was a major mistake: Instead, she should have stayed with the student.

While the assistant putting the student in such a confined space might seem questionable in itself, school district official Dale Burgos told Global News that “there are safe spaces set aside called Self-Regulation or Sensory Rooms. In the district, these rooms can be used for a variety of reasons, and school staff are instructed to accompany students while in these rooms.”

Loewen later opened the door, asked if the student wanted to play outside, and shut the door again when he yelled in response. When the student’s educational assistant returned, she found the student inside, curled up and crying. Loewen was far from the door.

It remains unclear how trained Loewen was in dealing with special needs children. But child psychiatrist Dr. Shimi Kang warns sharply against placing any kid into a confined room or area, noting that doing so can cause serious trauma.

“We know solitary confinement is a really serious psychological threat,” she told the Global News. “It could trigger anxiety, thoughts of depression, worst-case scenario things like post-traumatic stress disorder.”

As a result of her behavior, Loewen was later suspended from the teacher on-call list for four days, forced to complete a “Non-Violent Crisis Intervention” course, and had her teaching certificate suspended for two days this May.

“Leaving [a child] in isolation especially when they’re not supervised could put the child in serious harm,” behavior consultant Amy Tanner explained to Global News. “They could cause injury to themselves or to you.”