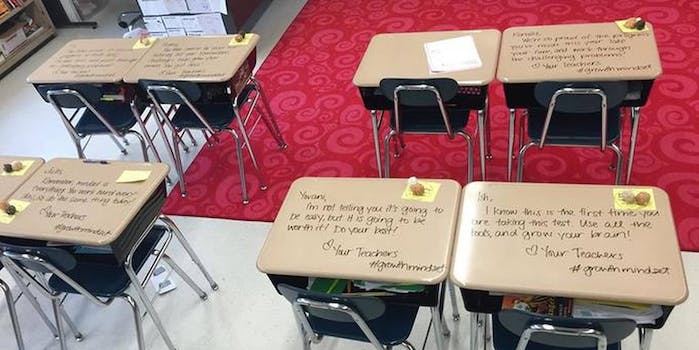 Teacher Of The Year right here.

Chandni Langford teaches fifth grade in the Woodbury City public school system in New Jersey. When she heard that her students were nervous about an upcoming test, she devised a clever and heartfelt way to encourage them.

Langford wrote inspirational messages on each student’s desk and left a doughnut hole on each one.

The pictures have since gone viral with over 18,000 shares, and hundreds of people have chimed in with messages of support.

@AP I'd say it was worth it, even if the desk tops had to be refinished. Nothing is more important than teaching self-esteem.

While many people expressed concern on social media about the desks’ surfaces—and the janitors who might have to clean them—the school clarified that the messages were written in dry-erase marker and would easily wipe off. The writing was removed before testing began.

One of Langford’s students, Emily Corrigan, told Philly.com, “I felt like I could do anything now. Everyone kept on smiling. I think it was really cool that she did everything for us.”

Langford told Philly.com that she got the idea from Pinterest.