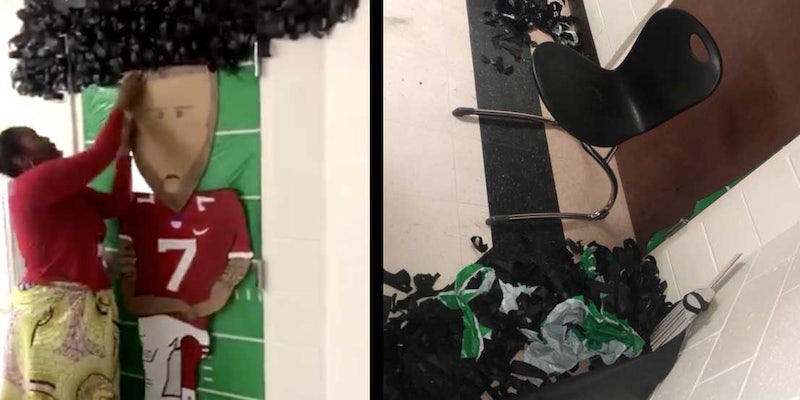 A Florida teacher was allegedly made to take down a poster of former NFL player Colin Kaepernick due to backlash from locals who found it “offensive.”

The teacher at the heart of the incident at Port Charlotte High School has since been identified as Alissa Perry, according to the Hill.

The moment when Perry announced the removal of the poster was recorded and shared on Twitter, reportedly by one of her students.

once again, racism being justified . one of the teachers at our school put up a Colin Kaepernick door peice FOR black history month, and the school claimed it was “offensive” and she was forced to take it down. pic.twitter.com/nX7XhpV0wE

“Thank you all for participating in this. I’m going to go ahead and remove it…Umm,” she pauses, visibly overwhelmed. She then says, her voice shaking. “Thank you.”

The video was posted to Twitter on Wednesday, at the end of Black History Month.

Perry had apparently completed the poster, which appeared to span the width of the whole door, the day before. Jaidyn Etheart, a student who shared the video, told WINK News that a few boys had put it up on Snapchat and called it “offensive.”

Charlotte County School District spokesperson Michael Riley defended the school’s actions to People magazine, saying Kaepernick, who started the trend of kneeling during the national anthem as a statement against police brutality toward the Black community, was now a “controversial, decisive personality.”

Riley also told WINK News that they were getting so many complaints from parents that “we just thought we have to put an end to this.”

“They [the school district] cracked under pressure,” Etheart told WINK News. “I don’t think that a few people’s opinion should be able to take away something that meant a lot to a lot of people.”

Riley referred to President Donald Trump in his statement, citing his comment that Kaepernick “disrespected” the flag. The school has reportedly continued to receive complaints after taking it down.

“Our hope is that our students experienced this as a learning opportunity and can be ambassadors for a united, United States of America,” Riley said.

Kaepernick has not made a public statement about the event, but retweeted Etheart’s post.

This is not the first time a school has dismissed the Black History Month celebration of Kaepernick. Earlier in February, a Worcester, Massachusetts charter school faced backlash after school administration allegedly requested a Kaepernick poster be taken down. An assistant principal at the Abby Kelley Foster Charter Public School reportedly told a student that a poster of a police officer would have to be put up next to Kaepernick’s poster if the students wanted to keep it.

The students decided to take it down, but have since been able to put it back up.

The Port Charles poster remains down, but other Twitter users have shared similar posters for Black History Month.

This was put up in a school in Arkansas. They didn’t ask the teacher to take it down because it’s *not* offensive. The principal at Port Charlotte overreached. pic.twitter.com/esSDPjHzJK

Dr. William Cobb Elementary in San Francisco, CA. My sons WHITE teacher made this for their 1st/2nd grade class himself (he is handicap and in a wheel chair) for the kids along with them doing a play about Rosa parks! Some schools should take notes!! pic.twitter.com/DA00wDIlCU