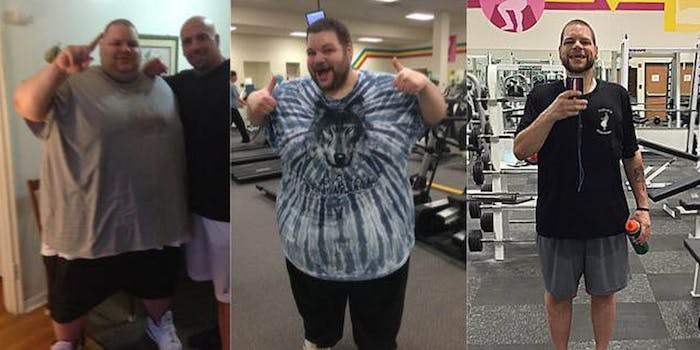 Swift's music inspired Ronnie Brower and he wants to thank her.

Less than two years ago, Ronnie Brower weighed 675 pounds. His doctor told him that if he didn’t make some major lifestyle changes, he’d be dead by age 35.

It was a wake-up call for the 28-year-old, who had been prone to excessive drinking, eating, and pill-popping all his life. Brower was unemployed and physically unable to leave his home.

But during his toughest moments, according to his former teacher and friend, Joe Bufano, one person gave Brower strength: Taylor Swift.

“He told me in his darkest days…he would often listen to Taylor, and it was the messages in her music that kind of gave him some source of joy and happiness,” Bufano told the Daily Dot by phone. “It kept him buying into life.”

Thanks to Swift and Bufano, who recently made a special video for Ronnie that went viral on Reddit, people all over the world will soon know Ronnie Brower’s name.

Bufano has known Brower since 2000, when Ronnie was a student in his high school history class in Syracuse, N.Y. Even back then, he was a big guy, requiring two desks to fit comfortably. But Bufano said that Brower has always been a “joy” with “a jovial personality.”

In 2005, Bufano left teaching to earn his law degree. He intermittently kept in touch with Brower online. “You could see from Facebook that he’d become entrenched in this lifestyle of partying and drugs,” Bufano said.

But in 2013, Bufano spotted a Facebook post by Brower about his doctor’s grim prognosis that he would die by the age of 35. In the post, Brower said he wanted to make big changes in his life, enlisting the help of personal trainers Nick Murphy and Jill Rupert at Mission Fitness. He even created a Facebook page for his weight loss journey called 600 lbs to Success.

For a few months, Bufano lurked on Brower’s Facebook page to see if he’d stick with his weight loss goals. After he started shedding a few pounds, Bufano reached out to lend his support.

“I started sharing [Brower’s] page with people to help bolster his confidence and bolster his support network,” Bufano said. “And it developed into a friendship.”

Ever the teacher, Bufano even began offering his former student various incentives if he reached certain goals. For instance, when Brower hit the 400-pound mark, he fulfilled his dream of swimming in a mountain lake, something that was previously impossible for him.

Last Chrismas, Bufano saw that Brower had almost reached his goal weight. So he decided to help Brower fulfill another dream: going to his first Taylor Swift concert.

On June 3, Bufano and Brower will drive five hours to Cleveland to watch Swift shake it off. But Bufano’s “dream scenario” is for Brower to meet Taylor and shake her hand. He wants Brower “just to have the opportunity to meet someone that he’s so passionate about and so grateful for her music.”

Now, Bufano hopes that Brower’s story will reach Swift, and that she can do something special for him at the Cleveland show.

Brower is down to 250 pounds. Soon, he’ll go in for a consultation to have his excess skin removed, which should bring him down another 30 or so pounds. He even has a girlfriend. He hopes to helps others by becoming a personal trainer, and he’s even having a documentary made about his story.

“It’s a great message for a lot of other people,” Bufano said. “I hope that our hard work helps to get it to Taylor.”

Photo via 600 lbs to Success/Facebook