Elsa from Frozen can turn anything to ice with just the touch of a hand—and now she’s doing it with arm crutches. A Target Halloween advertisement features a little girl with crutches wearing the Disney princess costume, and parents of children with disabilities are celebrating.

Jen Spickenagel Kroll is the mother of a child with a disability, and she shared a photo of the ad on Facebook to express her glee. 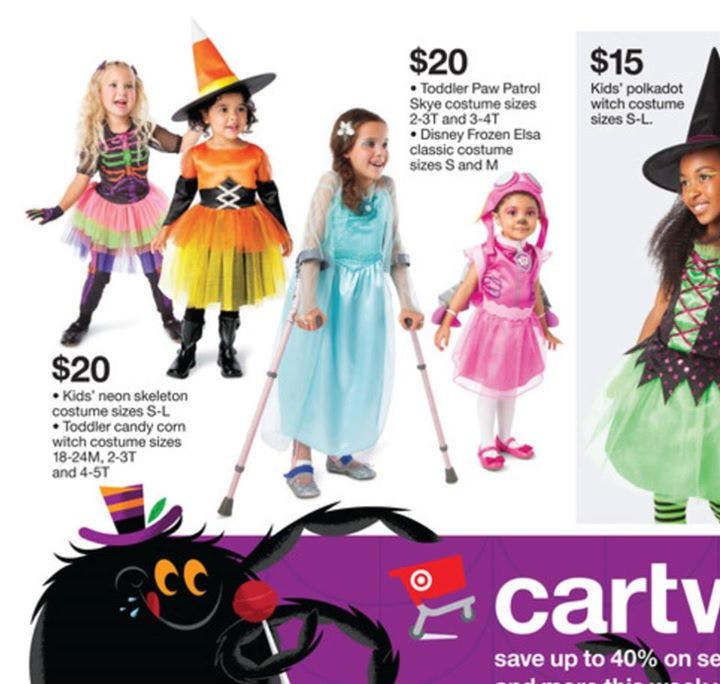 “Dear Target,” she wrote, “I love you. Thank you for including a child with braces and arm crutches into your advertising campaign! And as Elsa, no less! My daughter (with arm crutches and prosthetic legs) is going to FLIP when she sees this!”

She continued: “Including children with special needs into advertising makes them less of a spectacle to the general public when they venture out into the real world. Normalizing disabilities in children is PRICELESS.”

Families, advocates, and people with disabilities themselves are praising Target for its spirit of inclusion this Halloween.

.@Target Excellent job including a child with crutches and prosthetics in your ad! Normalizing disabilities in kids is SO IMPORTANT! :)

@Target Thank you for including ALL kids in your weekly add. My son has #CP so seeing a child with crutches like his is great to see.

“Target is committed to diversity and inclusion in every aspect of our business, including our advertising campaigns,” a spokesperson told the Daily Dot in an email. “Target has included people with disabilities in our advertising, including Halloween marketing, for many years and will continue to feature people that represent the diversity of communities across the country.”

Izzy’s ad sparked the idea for the Change the Face of Beauty campaign, which called on retailers to include models with disabilities in their advertising. At this point, the campaign has committed more than one hundred companies to the cause.