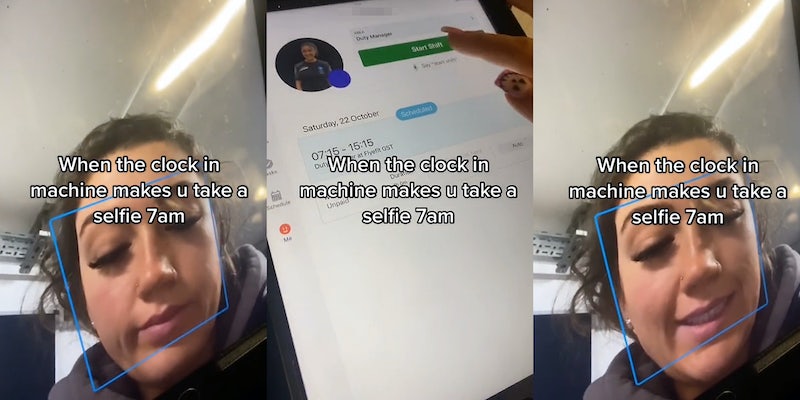 ‘The way I would quit so fast’: Employee says she has to take a selfie when clocking in at 7am, sparking debate

'This is both the smartest and worst thing a company could do.'

In a viral video posted Oct. 23, TikToker Gemma Dixon (@gemd_pt) shared the process of clocking in at her job using a selfie to start her shift. The video has over 3.5 million views as of Friday.

“When the clock in machine makes you take a selfie [at] 7am,” the overlay text in the video reads.

Dixon clicks the ‘start shift’ button that takes her to a camera screen where she is prompted to take a selfie. She smiles slightly and takes the photo.

Users in the comments section said they recognized the Deputy system, an Australian-based time clock with facial recognition services.

Other users joked about the clock-in concept and shared their opinions.

“Damn it’s like a work BeReal,” one user pointed out. BeReal, a French app, uses the same concept of taking a selfie and photo simultaneously at random times each day.

“Being a manager and seeing the deputy clock in/out pictures at end of week is THE BEST,” another user commented.

“The way mine would be me giving the finger everyday,” a third user joked.

Others were simply not on board with the system.

“The way I would quit so fast,” a user wrote. “What is asking for a photo achieving?”

The Daily Dot reached out to Dixon via Instagram direct messaging.