It's not the first time this week that United has faced backlash.

Tahera Ahmad, an associate chaplain at Northwestern University, claims that on a recent United Airlines flight she was disallowed from possessing something most frequent fliers get all the time: an unopened can of soda.

As she explains in a lengthy Facebook post, a United Airlines flight attendant brought her an open can of Diet Coke, and due to hygienic reasons, she requested one that had not yet been opened. The attendant then refused to grant her request, noting that passengers are not given unopened cans due to the fact that they could be used as weapons. 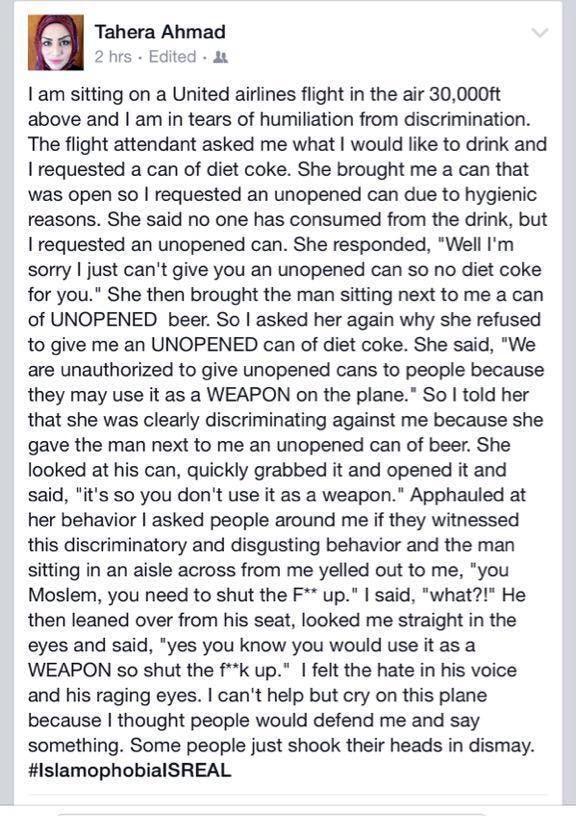 Shortly thereafter, the attendant brought a man sitting next to Ahmad an unopened can of beer, at which point she pressed for her request again, and was once again denied. Following the incident, Ahmad alleges that a passenger then stepped in, hurled some racist remarks, and accused her of trying to obtain a weapon.

“United is a company that strongly supports diversity and inclusion, and we and our partners do not discriminate against our employees or customers,” the company’s statement reads. “We are reaching out directly to Ms. Ahmad to get a better understanding of what occurred during the flight. We are also discussing the matter that Ms. Ahmad describes with Shuttle America, our regional partner that operated the flight. We look forward to speaking with Ms. Ahmad and hope to have the opportunity to welcome her back.”

In a tweet this afternoon, Ahmad said United had not yet reached out to her, but added that the flight attendant and pilot did apologize. 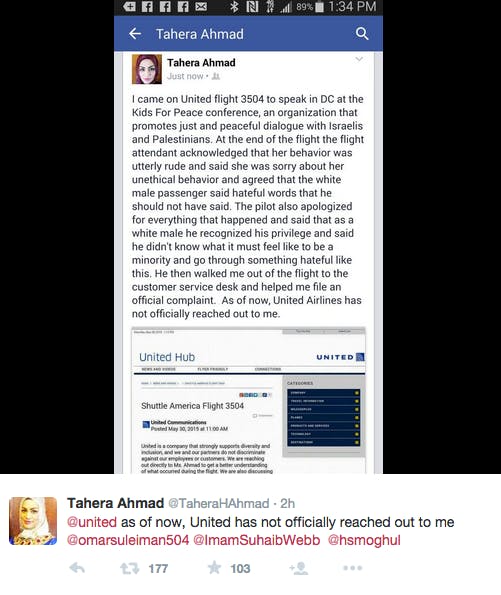 In the meantime, #unitedfortahera has started to circulate.

I logged over 130,000 miles with @United – will take my biz elsewhere if #UnitedAirlines isnt #unitedfortahera @TaheraHAhmad,we stand with u

This marks the second incident in the past week involving United Airlines. Just a few days ago, Walk Off the Earth singer Sarah Blackwood expressed her displeasure after being booted from a United flight just because her son was crying.