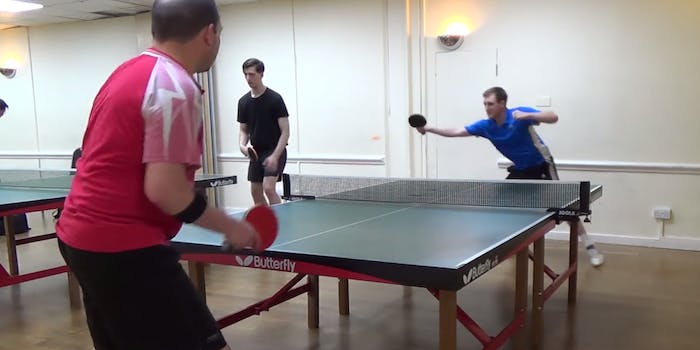 Man practices table tennis every day for a year, and this video tracks his improvement

Sam Priestley practiced playing table tennis every day for a year. But did it pay off?

They say if you practice something for 10,000 hours, you can become an expert. This video may not cover quite that much practice, but it still proves that hard work pays off in the end.

Sam Priestley challenged himself to practice playing table tennis every day for a year and make a one-second video from each day’s game. By the end of the year, he wanted to be good enough to reach the top 250 players in England. This video charts his progress from clumsy dork in January 2014 to competent player 12 months later.

Sadly, Priestley didn’t make it into the top 250 as he’d hoped. He didn’t even get close. But as he points out on his blog, that doesn’t mean the whole experience lost its value. His table tennis skill did improve dramatically, and while he hasn’t (yet) achieved his goal, he writes, “When you aim high enough it’s hard to fail completely.”

Ben Larcombe, the friend who challenged Priestley in the first place, is planning to write a book about what he calls the Expert in a Year challenge.