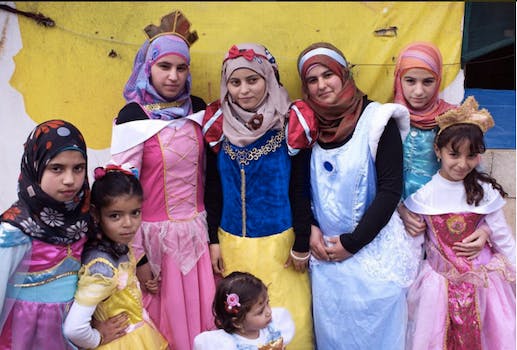 Life may be bleak, but one artist wanted to give these children a chance to dream.

For young Syrian refugees, life is hardly a fairytale. But thanks to a project from a Syrian artist and a local photography studio, some women in a refugee camp were able to feel like princesses for a day.

In a series called “Once Upon A War,” Saint Hoax, an anonymous Beirut-based artist, teamed up with Plastik Studios to bring a bit of joy and levity to a refugee camp in Akkar in Northern Lebanon.

“As a result of the Syrian civil war, 4.6 million Syrians have become refugees. As a Syrian citizen myself and as a human, I felt the need to help,” Saint Hoax wrote on his project’s website.

Bayan (age 12) chose the Sleeping Beauty dress because it reminded her of a similar dress that she once had. When Bayan and her family left their home 3 years ago, they had to leave everything behind. That was the last time she ever saw her pink dress. Raghad (age 12) loves Frozen because it highlights the relationship between two sisters. She’s extremely attached to her sister and would do anything to protect her, just like Elsa. Mona (age 11) has 2 favorite princesses, Jasmine and Belle. She chose Jasmine because she’s an Arabian princess, and Belle because of her intelligence. Both princesses are strong and adventurous and Mona relates to that. Bayan, Raghad and Mona all met in the camp 3 years ago. They became close friends ever since. Their dream is to become teachers. @malaakngo @plastikstudios #OnceUponAWar

For the past two months, the artist, along with Plastik Studios and an non-governmental organization called MALAAK have worked to allow the children in Akkar to do a bit of dreaming. Two weeks ago, it all came to fruition, just in time for International Women’s Day on March 7. Saint Hoax spoke to the girls who were photographed, and got to hear about the princesses they loved the most and their hopes for life outside the camp.

“The campaign was Saint Hoax’s idea,” Eli Rezkallah, creative director at Plastik Studios, told the Daily Dot in an email. Plastik represents Saint Hoax and they partnered with MALAAK to bring the project to life. Belle’s iconic saffron gown, Snow White’s dress, Sleeping Beauty’s bubblegum gown, and others were provided in an array of sizes thanks to friends of MALAAK.

In addition to the moving still images, they also produced a video that shows a jarring juxtaposition of Disney dreaming and the realities of refugee life. “Since 2011, millions of Syrian children were forced to stop dreaming,” a card in the video reads.

The scene might look bleak, with young girls in bright costumes against a dusty and barren background. But Rezkallah said he was amazed by the spirit of these young people: “I felt that the entire experience was enriching and inspiring for me as an individual and the entire team. We had the pleasure of playing with the children, talk to them, learn from their experiences and most importantly what was so inspiring is to see how positive and hopeful they are about their future and how eager they are to learn.”

In honor of International Women’s Day, a few of the girls at the camp have taken over Saint Hoax’s Snapchat (username: Saint Hoax) “to show their life on the camp to the world,” Rezkallah said.

Cinderella is a dreamer and so is Maram (age 16). She believes in a brighter tomorrow. When we talked about the war, she managed to remember only the good parts out of this tragic experience. Maram loves kids and she takes care of most of the children at the camp. Her dream is to become a children’s nurse. Hiba (age 2) was born in Lebanon. She has never been to Syria and this is the only life she has ever known. She never watched any Cinderella film but her parents told her the story. When we showed her the Cinderella dress, she chose it out of all the other dresses. This was the first time that Hiba got to put on a costume and play pretend. @malaakngo @plastikstudios #OnceUponAWar

“It breaks my heart knowing that many of these girls could face sexual and gender-based violence, exploitation, trafficking, early marriage,” Saint Hoax told indy100. “What also upsets me is that most of these girls won’t get the proper education they need. Like every child their age, they have so many dreams. It’s upsetting to think that most of their dreams might not come true.