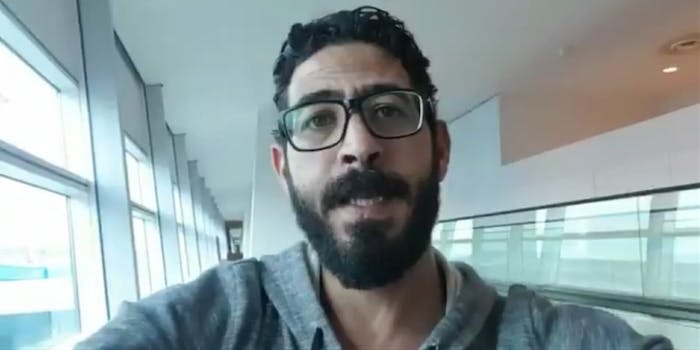 He was working abroad when the war broke out, and now he's undocumented.

For the past two months, 36-year-old Hassan al-Kontar has been living at a Malaysian airport. He’s also been tweeting about how he got stuck in the country’s capital, Kuala Lumpur, in the first place.

When the Syrian Civil War began in 2011, al-Kontar was working in the United Arab Emirates as an insurance marketing manager. His passport soon expired, turning him into an undocumented citizen, and the UAE detained him after he tried to renew his passport. Authorities only gave him two options: Go back to Syria or fly to Malaysia, which wouldn’t require a visa for his arrival.

Al-Kontar originally tried to fly to Ecuador so he could be admitted as a Syrian refugee and become a citizen, but Turkish Airlines canceled his flight “at the last minute,” he told BuzzFeed News. He soon tried to fly to Cambodia instead, but the country said he didn’t meet the proper “requirements” necessary to enter. So, for now, he’s stuck in Malaysia, living within a terminal for Asia Airlines.

As a result, al-Kontar eats the same meals every day, provided to him from Asia Airlines. He uses his luggage and travel pillow to sleep on the floor and he has to make due with the airport’s bathroom facilities just to clean himself.

“Cleaning is tricky,” he told BuzzFeed News. “To take a shower, I use the special needs facility because people don’t go in there too much. Now I have clean clothes, so it is better than the first month, but once I was [so] dirty and it annoyed me [so much] I could not sleep.”

He also hasn’t seen his family since December 2008, before the Syrian Civil War broke out. His family is safe, he explained, but they are “worrying” and “have their own problems they need to solve.”

Its not only my personal story, it's the story of each kid, mother, father, brother and sister is Syria who just want this war to stop no matter what.
It's not a political story to win or lose the "thron"..it just a human story where everybody deserve to live in peace pic.twitter.com/Td4irdHKgt

More importantly than his living conditions, however, al-Kontar stresses that the world should be paying attention to the human rights abuses that the Syrian people are facing since the war began, not necessarily how he’s sleeping or what kind of food he’s getting at the airport. That’s because al-Kontar sees this as an institutional problem and humanitarian issue, one that affects Syrian refugees as a group.

“The minute the Turkish [airline] canceled my ticket and did not allow me to board, it was not because of me as Hassan, it was because of my nationality,” al-Kontar said in a video from late April. “From that point, it [became] a general problem, not a personal one.”

It's a problem with 2 faces, personal and general, both will lead you to the same conclusion, we are from Syria, almost all the governments and authorities around the world is judging us because of that only.
Yes it's a new type of rasicem since 2011.https://t.co/I40p1cEfa4 https://t.co/6npgb7pmZ7

However, al-Kontar’s situation may improve in the near future. In late April, he turned to his Twitter followers and explained that Canadian volunteers from Canada Caring gave him an application, a lawyer, money for expenses, and work in Canada so he can come to the country. The group is asking Canada’s Minister of Immigration to grant al-Kontar him a temporary residence permit so he can come to Canada.

Now, al-Kontar wants followers to send the Canadian immigration minister, Ahmed Hussen, an email in support of bringing him to the country.

Plz retweet
I have Some good news and I need your help all of you to make it happen.
Please send an email to Mr. Ahmed Hussen – Canada's Minister of Immigration.
"[email protected]"
Tell him you support a Temporary Resident Permit for Hassan to come to Canada immediately pic.twitter.com/Wmpb2CSsHU

“A great country, a very humanitarian society, a young great government decided to show the rest of the world how to behave when there’s a human desperately [in] need for help and to give us an example yet again for the other governments to look at in the future,” al-Kontar said in a video to his followers. “Canada is what I’m speaking about.”

Update 9:45am CT, Nov. 27: Al-Kattar has been granted asylum in Canada, arriving in Vancouver Monday night.

“I did not believe it until they showed me the ticket,” he told the CBC. “I said until I reach Canada, nothing is sure.”

Al-Kattan spent seven months in the Kuala Lumpur airport, before being held in a Malaysian detention center for the last two months. The CBC says the Canadian government and a lawyer helped broker his release, and he is sponsored by the Canada Caring Society, which gathered 62,000 signatures in an online petition.