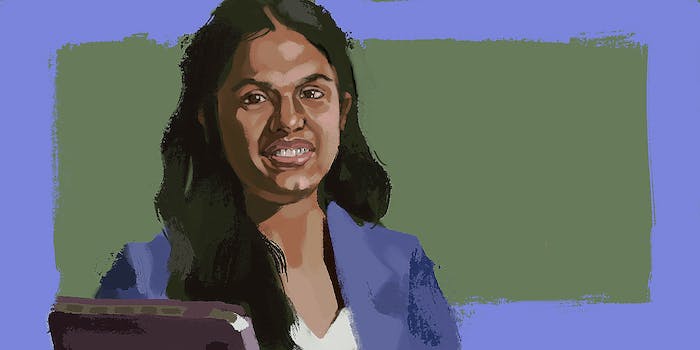 Swetha Prabakaran is training the workforce of tomorrow

The 'champion of change' is teaching kids how to code.

Swetha Prabakaran spends most of her school day like any other high schooler. The 15-year-old junior at Thomas Jefferson High School for Science and Technology in Alexandria, Virginia, is kept occupied by classes, homework, and extracurriculars between school bells.

By evening, she’s running a nonprofit organization that extends across the globe.

Prabakaran is the founder of Everybody Code Now!, an organization dedicated to providing computer science courses to underserved middle and high school students. It currently operates in 12 states and is building partnerships in four countries, including Ghana and India. Prabakaran said some days she forgets just how big Everybody Code Now! has become because it’s grown so fast.

“Because I had encouragement at a young age and I was able to see other women who were really high up in the field as an inspiration, I really wanted to see stuff like that exist for younger girls like my sister and her friends.”

Everybody Code Now! has built a vast network of high school and collegiate volunteers who work to coordinate programs and expand computer science learning in their communities. It’s grown primarily through word of mouth and the nonprofit’s presence at computer science-focused conferences and meetups. Because of its scattered presence, the group relies primarily on digital communication to ensure everyone involved is in the loop and on task.

“You’ve probably never heard of a group of teenagers using Facebook Messenger as a way of getting things done, but it does happen,” Prabakaran said. “That’s really one of the keys to our success, to make sure that we continue to do the work we’re doing while also managing our lives as students.”

The organization currently offers three primary programs, all with a particular focus on outreach to girls. This year, Everybody Code Now! also launched a mentoring program, which Prabakaran said is designed to support young women “as they go through these upper-level classes that right now are predominantly male.”

“Because I had encouragement at a young age and I was able to see other women who were really high up in the field as an inspiration, I really wanted to see stuff like that exist for younger girls like my sister and her friends,” Prabakaran said. “That’s where my motivation came from, to not only stick with computer science but also to create Everybody Code Now! and make sure these kinds of opportunities exist for the next generation.”

Prabakaran actually didn’t take a computer science course until her freshman year of high school at the behest of her mom.

“That year I had this absolutely incredible computer science teacher [Ms. Ria Galanos] who really worked to show me there’s more to computer science than coding away in a room by yourself, and how you can use your creativity and your ideas with technology and also use it to help other people,” Prabakaran said.

She was captivated by the field and became an active part of the National Center for Women & Information Technology, a group Prabakaran credits for supporting her through her journey in computer science. “I’m really proud of the work they do and that I’m involved with [them],” she said.

While there is an emphasis on encouraging young women to follow through with their interest in computer science, Everybody Code Now! means it when it says “everybody.”

“The way that Everybody Code Now! aims to address the issue is by showing kids of all ages, girls and boys, that this is something that they can do, this is something that they’re all capable of doing,” Prabakaran explained. The organization is dedicated to creating a positive and encouraging environment for its students, “regardless of whether you’re a girl or a boy or your race or orientation.”

“You find inspiration in projects that matter to you and find ways to make an impact, and you’ll find a way to work it in somehow—even if it means your sleep is not a thing anymore.”

The more people Prabakaran and Everybody Code Now! can get interested in computer science, the better; according to the Bureau of Labor Statistics, by the year 2020 there will be 1 million more computing jobs available than students to fill them.

Prabakaran recognizes that Everybody Code Now! can’t fill that void entirely on its own—“It’s not really something we can answer with a silver bullet,” she said—but her efforts did catch the eye of the White House. Prabakaran was honored as one of 11 young women who were named “champions of change” for doing “extraordinary things to empower and inspire members of their communities.”

The experience had a significant impact on Prabakaran. She said that when she received the call, “It took me a couple minutes to to just digest that I was on the phone with somebody from the White House.” Just reflecting on the moment, she said, “I’m still pinching myself. You know, ‘Did that really happen?’”

@sherylsandberg we met @sheplusplus #include summit-y'day I spoke about my work @WhiteHouse! Thanks for inspiring me! pic.twitter.com/LMmhIH6kBm

The honor provided a considerable platform for Everybody Code Now! to spread its mission, but it also served as recognition for what Prabakaran and her nonprofit had already accomplished.

“It’s made a huge impact on me personally because it’s served as validation that work we’re doing matters and is meaningful in the lives of the people we’re interacting with and the kids that we’re teaching,” Prabakaran said.

There’s still plenty of road ahead for Prabakaran to explore; she intends to go off to college to pursue an engineering or computer science degree and put it to work as soon as she can, with a goal of “maybe starting a company of my own one day and working to make an impact through technology.”

She already has a head start on that goal, too; Prabakaran is a member of her school’s chapter of the Future Business Leaders of America, and she’s somehow found time to start work on an altruistic app as a side project in addition to school, Everybody Code Now!, and her other commitments. The app she’s building will help make it easier for people to find and donate to food banks in their area.

“You find inspiration in projects that matter to you and find ways to make an impact, and you’ll find a way to work it in somehow—even if that means your sleep is not a thing anymore,” she said.

No matter where her life leads, Prabakaran plans to keep Everybody Code Now! with her.

“Until we get to a day where every child across the world gets access to a computer science education and has the skills they need to be successful in a 21st century workforce,” she said, “I think we’re just going to keep going and working, and doing the work that we do to make sure these opportunities exist for everybody.”