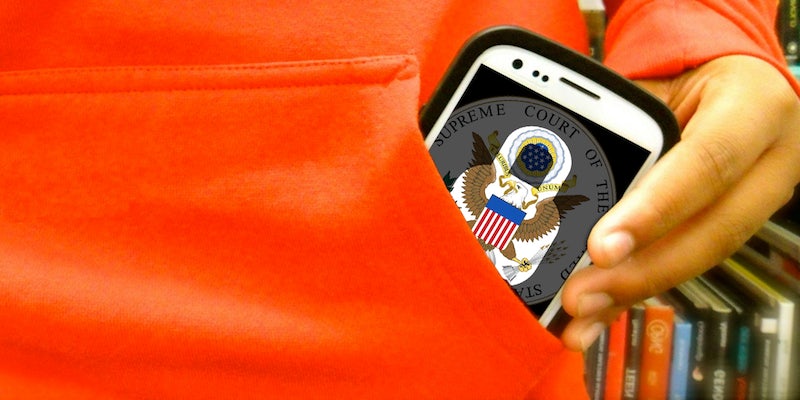 Supreme Court: Police cannot search your cellphone without a warrant

The milestone ruling came down on Wednesday.

Police officers are not legally allowed to search through the contents of someone’s phone without first obtaining a warrant, the U.S. Supreme Court decided Wednesday in a milestone ruling.

Two major cases on the subject were decided in one fell swoop Wednesday morning in a ruling that protects the over 91 percent of Americans who own and carry cellphones from warrantless search and seizure even if they’ve been arrested.

“Modern cellphones,” the decision reads, “are now such a pervasive and insistent part of daily life that the proverbial visitor from Mars might conclude they were an important feature of human anatomy.”

Hoping we see a lot of this “visitor from Mars” standard in litigation in the future.

In what’s being a called a sweeping endorsement of digital privacy, Chief Justice John Roberts wrote the opinion on Riley v. California and United States v. Wurie that reversed five decades of law allowing an arresting officer to search a suspect’s cellphone because it was in ‟the area into which he might reach”—an allowance originally intended to enable police to discover weapons and guard against the destruction of evidence.

The proliferation of smartphones, which can hold data pertaining to virtually all aspects of a person’s life, have drastically changed the legal arithmetic.

Some observers worried that the decision might not be clear or actionable for police in the field to follow. On the contrary, Roberts illustrates one clear guideline for law enforcement.

“Our answer to the question of what police must do before searching a cellphone seized incident to an arrest is accordingly simple— get a warrant.”

In Riley v. California, a 2009 arrest of San Diego college student David Leon Riley led to the confiscation and search of Riley’s smartphone after two handguns were found in the car he’d been driving with expired registration tags. The guns were linked by a lab to a gang shooting that had taken place two weeks prior.

The phone showed pictures of Riley with a red Oldsmobile that looked like the one witnesses said was involved in the shooting as well as videos of him making gang signs.

Cops then gathered the phone’s geolocation data to find that he had been in the area of the shooting when it occurred.

Riley was convicted of attempted murder and sentenced to 15-years-to-life in prison. He contested the decision all the way up to the Supreme Court.

The second case, United States v. Wurie, raises similar questions from a September 2006 arrest. After cops saw Brima Wurie sell drugs on a Boston street, Wurie was arrested and his flip phone was confiscated. Soon, he received phone calls from a number identified as “my house.” Without a warrant, cops linked the number to a physical address–which Wurie denied was his home. They eventually obtained a warrant and found guns and drugs during a search of the premises.

Wurie was convicted on three counts, but charges were later overturned when a judge ruled that Wurie’s Fourth Amendment rights had been violated.

Despite the fact that one case involved a smartphone and another a flip phone, the Supreme Court decided in clear and unmistakable language that both were unacceptable invasions of privacy.

In 1969, the Supreme Court ruled in Chimel v. California that police officers making arrests are allowed to search suspects, along with the area immediately surrounding them, to ensure there aren’t any hidden weapons and to prevent any pertinent evidence from being destroyed.

However, in today’s decision, the court ruled neither of those reasons are justified the search of a cellphone.

‟Digital data stored on a cellphone cannot itself be used as a weapon to harm an arresting officer or to effectuate the arrestee’s escape,” Roberts wrote. ‟Officers may examine the phone’s physical aspects to ensure that it will not be used as a weapon, but the data on the phone can endanger no one.”

‟The briefing also gives little indication that [the evidence destruction] problem is prevalent or that the opportunity to perform a search incident to arrest would be an effective solution,” he added.

This paragraph could be huge for future privacy cases. Roberts cites Sotomayor’s famous concurrence in US v. Jones. pic.twitter.com/M8YQOZ1WNr

The Fourth Amendment protection has limits, however, which is always true when it comes to searches. Child abduction and the imminent threat of bombs were two examples given by the court as important exceptions to the new rule.

Roberts also addressed how the physical reality of how and where cellphone data is stored presents an extremely thorny problem for officers conducting a search.

As mentioned, the court’s Chimel decision holds that, lacking a warrant, law enforcement officials are only allowed to search a suspect and ‟the area into which he might reach.” While a suspect’s cell phone may be within reaching distance, data accessible on that device could be located virtually anywhere in the world. For example, an officer looking through a cellphone after making in arrest in Houston, Texas, could end up accessing private data held on a server located just outside of Portland, Oregon.

‟The scope of the privacy interests at stake is further complicated by the fact that the data viewed on many modern cell phones may in fact be stored on a remote server,” the court held. ‟Thus, a search may extend well beyond papers and effects in the physical proximity of an arrestee, a concern that the United States recognizes but cannot definitively foreclose.”

Photo via The Daring Librarian/Flickr (CC BY SA 2.0) | Remix by Jason Reed