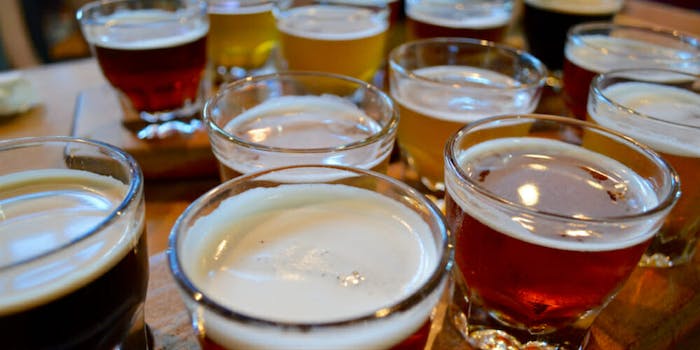 Two beer delivery employees saved a life on Wednesday when they saw a man getting ready to jump off a bridge and pulled over to intervene.

Kwame Anderson and Jason Gabel had just finished dropping off a delivery at a nearby sports bar when they drove over Interstate 94 in Saint Paul, Minnesota, and saw a man standing on the bridge’s ledge, on the other side of the fence.

“Bro, you all right?” Gabel shouted to the man. “Come on this side, bro.” The pair pulled over and Anderson called 911 for help.

They were told to stay back until police arrived, but Anderson was worried they would come too late. “I gotta keep this guy entertained somehow because if I wait for police, this thing may be over,” said Anderson to KMSP.

Anderson approached the man and began asking him questions about him and his life. He learned the man is a father and grew up in Chicago. “I grew up on the East Side of St. Paul, in the hood just like you,” Anderson said, according to the Pioneer Press. He tried to lure the man away from the edge with food and money, but both offers were rejected.

Anderson continued to speak with the man for an hour, even after police arrived. “I could feel tension in the air; he was intimidated by white cops. I said my helper is an extremely intelligent guy, I said I think we can talk this guy off the ledge,” Gabel said to KMSP.

Then, as has happened countless times in human history, the offer of free beer shook the man’s resolve. “Do you want to have a drink with me?” Anderson asked, to which the man paused, then replied, “Maybe.” Police stayed near the man as Anderson ran to the truck and retrieved a pack of Coors Light. He returned and told the man that if he came away from the ledge, the 12-pack was all his. He agreed, and officers were able to get him into an ambulance and on the way to the hospital for care.

“Coors Light saves lives,” Anderson said in an interview with Kare 11. Anderson, who is a comedian, invited the man to one of his shows and said he would make sure the man got his beer.