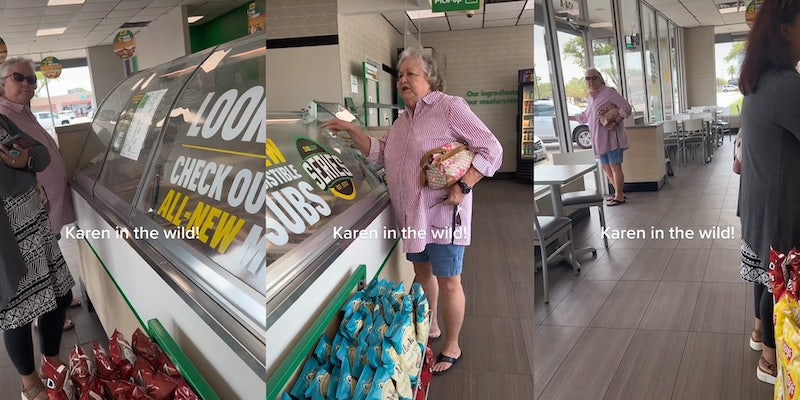 ‘They just ghosted her and she didn’t know what to do’: Subway worker, other customers pretend ‘Karen’ customer isn’t there after she’s rude

'She was so embarrassed at the end.'

During the social distancing and stay-at-home orders that were enacted in response to the pandemic, food service workers reported a massive uptick in rude customer behavior that appears to have persisted long after the pandemic subsided. One restaurant even shut down for “a day of kindness” to help bring awareness to the poor treatment its workers received at the hands of unruly patrons.

The “customer is always right” philosophy was embraced by American businesses at the onset of the Industrial Revolution and seems to transmogrified some U.S. shoppers into a “nightmare” for businesses and its staff members long before the pandemic; the pandemic seems to just have exacerbated it. Perhaps, the advent of smartphones and prevalence of public freakouts becoming fodder for social media views has helped to bring more of these human behaviors to light.

One such incident was recorded at a Subway location by TikToker @chalie_kincade. In the video, a woman demands a worker “finish” making her sandwich. The woman was ultimately ignored until she had no choice but to leave the store.

“Finish my sandwich!” the woman screams at the worker at the start of the video.

The subway employee cuts her off, “No I don’t finish because you need to respect me.”

It’s at this point that the woman starts to look around as she isn’t receiving any service. The worker moves on to making sandwiches for two other customers. “Cold cut trio,” one of the other customers requests.

“Hi, may I help you?” the worker asks another, all while the irate customer is attempting to get her attention.

“Can I have one 6 inch, uh, white bread?” the other customer says.

The angry customer steps around for a bit nervously before pressing her finger against the glass, demanding, “Finish my sandwich!” No one responds, and she finally walks off muttering to herself: “All right you’re gonna be reported that’s for sure.”

She makes it to the front door and is about to open it to leave before walking back to the worker. “Call your—call your supervisor right now. Please, call her right now,” she demands. “You wanted to call her a while ago call her now. … I’d like to talk to her.” No one acknowledges her.

“Toasted, no cheese. Toasted,” one of the other customers continues.

The angry customer then leaves the store.

@chalie_kincad’s video was viewed 2 million times. Commenters applauded the way the employees and customers treated the “disrespectful” woman. Many believed that whoever was inside of the Subway that day discovered an effective method of handling “Karens” out in the wild.

“The way everybody ignored her, she had to be questioning her own existence I love it!!!!!” one said.

“They just ghosted her and she didn’t know what to do, so she left, the best thing she could have done,” another said.

“She was so embarrassed at the end,” a third claimed.

The Daily Dot has reached out to @charlie_kincade via TikTok comment.