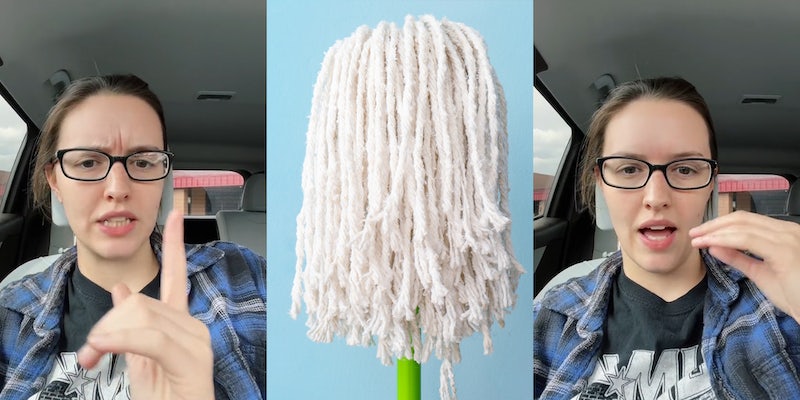 ‘I don’t understand how that customer even came up with that’: Subway worker says ‘Karen’ accused her of mopping tabletops with dirty mop water

'I would've quit right then and there.'

In a viral video posted on Aug. 21, TikToker Michelle Keene (@m.alexis.k) shares an encounter she had with a ‘Karen’ during her time as a Subway employee. Keene refers to a video posted by fellow TikToker Brandon Tyler (@paneraputhylips) where he recalls a customer who complained about supposed restaurant cleaning techniques and shared her similar experience.

“Thinking about the time my manager had to talk to me because a customer said they saw me mop a table,” the overlay text on Tyler’s video reads.

Keene was surprised to hear that this exact situation happened to her several years ago and proceeded to share her story. While she was mopping late in the evening during her shift, Keene says a woman came in to order. The TikToker explains that she put the mop down, went around the counter, and washed her hands before serving the customer.

“Right off the bat, she’s already angry because she had to wait two, three minutes for me to do those things,” she recalls in the clip.

The woman allegedly continued to exhibit ‘Karen’-like behavior and asked for the manager. Keene told her that the manager would be in in the morning. The next day, the TikToker arrived to work and her manager immediately pulled her aside after clocking in.

“My manager is like, ‘I had a woman call this morning and she told me she came in last night and she watched you mop the bathrooms and the dining room and then use the same dirty mop and mop water to then clean all the table tops and the booth seats,” the manager allegedly told Keene.

After Keene denied the accusation and because there is no security camera inside the gas station Subway’s dining room, the manager then asked her to show her how she cleans the tables. The manager proceeded to lightly threaten Keene that they would have a serious issue if this were to happen again, Keene says.

“I don’t understand how that customer even came up with that but the fact that someone else has experienced something similar to this also is crazy to me,” she says.

Keene told the Daily Dot via email that part of her thinks that the manager didn’t believe the woman, saying, “I feel like if she did believe it then I would’ve at least gotten a write-up.”

In the comments section, users shared their opinions on the matter.

“A manager should know better than to take the word of a customer,” one user commented.

“Because she had to wait, she tried to get her or him fired,” another said.

“I’d of said, ‘how about this serious issue, you’re a person short today, buh bye,’” a third user commented.

Keene added clarified in a comment that she had quit the job seven years ago.

“Okay. I NEVER mopped tables y’all. The issue wasn’t just that it was supposedly mopped with dirty water,” she wrote.