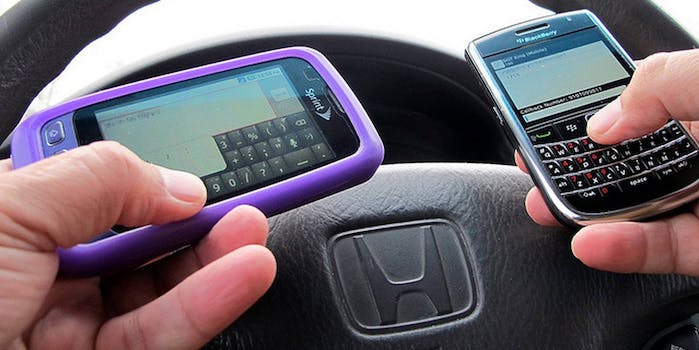 There's a time and a place to share your best snaps: while you're driving isn't it.

Did you know that April is Distracted Driving Awareness Month? Well, now you do—and a study from Erie Insurance shows that there are even more distracted drivers out there than we thought.

In the olden days (of the early 2000s) the greatest danger on the road was talking on your hip, new cellular phone while driving. Then texting became en vogue, and suddenly there was a whole new peril on the road. But now that sharing every moment of your life on social media is the thing to do, Erie’s study shows that too many are snapping pics and posting them to various social networks while behind the wheel.

The data was collected over 90 days of analyzing the hashtag #whiledriving, widely used on Twitter and Instagram. According to the data, the worst #whiledriving offenders are in Texas, California, and Florida, with South Carolina and New York rounding out the top five.

The study also found that the hashtag was most often associated with clouds, sunset, sky, and nature in general.

According to the National Highway Traffic Safety Administration, in 2014 there were 3,179 people killed and 431,000 injured in accidents related to distracted drivers.  There are laws in the books in most states about using a mobile phone while driving.  Infractions usually require defensive driving or a hefty fine.  It seems many social media fans remain undeterred.  There are driving guide options detailing state by state regulations and tips for safe driving.  Many drivers ignore them and remain unsafe.

We understand the importance of sharing #content with your followers. But rest assured, they can wait until you pull over to share that #nofilter sunset.