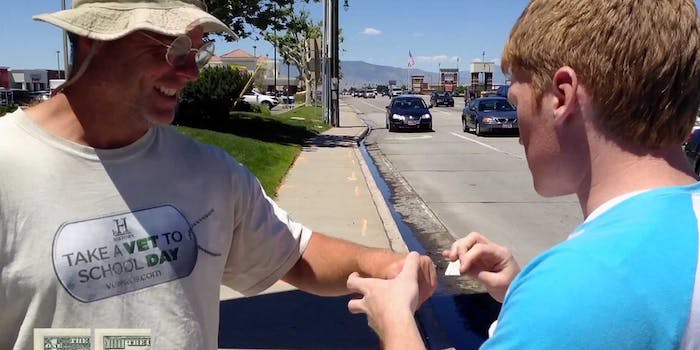 Stuart Edge pulled $1,000 from his personal account to make this trick work.

In order to make more money appear, all you need is a little faith—and a YouTube magician on your side.

YouTube pranksters have done charitable things for the homeless before, and now Stuart Edge joins them in his latest video.

“I’ve taken $1,000 out of my personal funds, and we’re gonna hit the streets looking for people who could use a pick-me-up,” Edge explained.

The trick starts off with Edge placing a folded $1 bill and a folded $100 bill in the person’s open hand. After he closes it, Edge takes one of the bills—conveniently, always the $100. But with a little believing, the $100 appears in the other person’s hand.

The people on the other end of the trick range from homeless veterans to musicians and people asking for anything to help. Each of them are amazed and appreciative as they open their hand to discover the $100 bill enclosed.

He explained to one woman that there’s magic in fist bumping, and preempted the big reveal with a bump.

Many of the people hugged him afterwards, and the musician started to play his guitar and harmonica.

“How did you do that?” one man asked after the reveal.

“It was magic, man,” Edge replied.