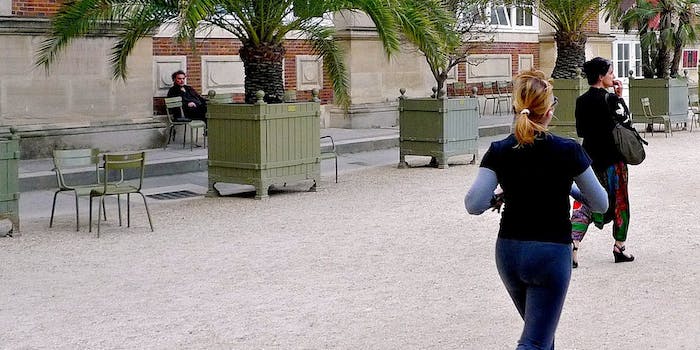 Although street harassment is still far too common all over the world, a handful of women have come up with ingenious ways to combat it. Case in point: 32-year-old Fatima Guzman, a Mexican woman who snapped a photo of a man who attempted to assault her on her morning jog and posted it on Facebook.

The Daily Mail reports that Guzman was jogging through a park in Guadalajara last weekend when she saw the anonymous man watching her from behind a bush. Although she tried quickening her pace to avoid him, he caught up with her and attempted to grope her before another man managed to tackle him to the ground.

While her attempted assailant was in a chokehold, the quick-thinking Guzman whipped out her cell phone and snapped a photo of him. She demanded he tell her his name so she could report him to the authorities, “but he refused to tell me and then managed to break free and run off,” Guzman says.

Although she never found out his name, Guzman was fortunate enough to have clear photographic evidence of her attacker. So she posted the photo on Facebook, in the hopes that someone in the area would be able to identify him. Guzman has since taken the post and the accompanying photo down from her Facebook page, but here’s the original text (translation via Micah Singleton):

On Sunday October 5, 2014 at 10:00 am, I was working out in the park [Hernandes en la colonia Parques del Nilo] and this unscrupulous guy tried to chase me and [missed touching me], fortunately he didn’t expect my reaction as I pushed and started yelling and others passing by came to my rescue and held him, but he escaped.

I leave his photo “to be careful if you see him and you can identify him” [?], and I’m prepared/willing to denounce and address the consequences of his actions.

Street harassment is a crime!

While her actions were undoubtedly brave, Guzman is not the first woman to take to social media to out her attempted attacker. Last month, photographer Caroline Tompkins released a series of photos she’d taken of men after they’d street-harrassed her, and earlier this week, a Seattle woman named Julia Marquand tweeted a photo of a man who attempted to grope her in a local park. The publicity surrounding her tweets ultimately led to the arrest of Daryl Sharma, a sex offender out on parole who’d previously been convicted on assault charges. Here’s hoping Guzman’s efforts to out her harasser will yield the same results.