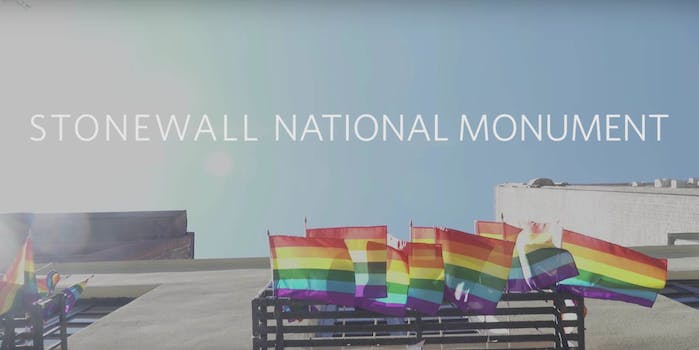 'I believe our National Parks should reflect the full story of our country,' said Obama.

After becoming a New York City landmark last year, the Stonewall Inn is now a national monument. President Obama announced the historic gay bar, and scene of the 1969 police raid and uprising, the first national monument to the gay rights movement.

According to the Washington Post, the Stonewall National Monument protected area includes 7.7-acre Christopher Park across the street from Stonewall. The White House released a video to commemorate the designation. In it, President Obama says, “I believe our National Parks should reflect the full story of our country.”

The video also features LGBT activists and people who were there for the Stonewall Riots. One such activist, Tommy Lanigan-Schmidt, spoke of the fear most gay people had of coming out back then. “We had nothing, so we had nothing to lose.”

In a statement from the White House, Rhea Suh, president of the Natural Resources Defense Council, says, “We tell the story of who we are through our national treasures, and the president’s decision represents a new definition of inclusivity for our national park system. Stonewall’s tiny urban park has a powerful cultural history—and using the Antiquities Act to declare it a monument helps us preserve for future generations the lesser-told story of the LGBTQ community’s struggle for equality.”

Russell Roybal, deputy executive director of the National LGBTQ Task Force, said in a statement: “Trans and gender-nonconforming people of color led the riots at Stonewall nearly five decades ago—and it is a cruel irony that today these folks face some of the highest levels of poverty, homelessness, discrimination, and violence in our community. So while the Christopher Street Park National Monument will provide a focus for our community in times of happiness and in times of grief, it will also provide a vital beacon of inspiration as we continue the struggle for lived liberation.”

The NYPD has never apologized for the Stonewall raid, and at a press conference about pride weekend yesterday, NYPD Commissioner Bill Bratton said there was no need for one, perhaps even backhandedly crediting the NYPD for the entire gay rights movement.

“There’s no doubt denying that out of that terrible experience came so much good, that it was the tipping point,” Bratton said, according to the Observer. “An apology, I don’t think so. I don’t think that’s necessary. The apology is all that’s occurred since then.”

As he said this, Bratton stood in front of an NYPD vehicle decorated in rainbow colors for pride.

Commissioner Bratton at a Pride press conference just now says the NYPD owes the LGBT community no apology for Stonewall.

And here's Bratton posing after the press conference with the rainbow-painted Pride-themed NYPD vehicle: pic.twitter.com/ZWFfD12HNj

The Stonewall Inn has remained an important site for the LGBT community and allies. People gathered there to celebrate the legalization of same-sex marriage, and to mourn the victims of the Pulse shooting. The White House even referenced the shooting in its statement about the monument: “As seen two weeks ago in Orlando, Florida, LGBT Americans continue to face acts of violence, discrimination, and hate. LGBT people of color are especially at risk. The administration is committed to continuing the fight for dignity, acceptance, and equal rights for all Americans—no matter who they are or who they love.”