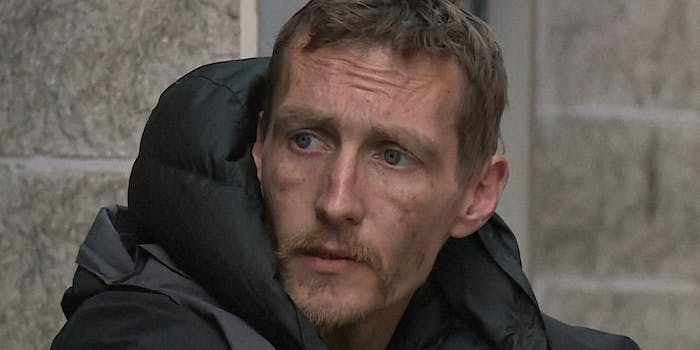 They helped strangers—and now strangers are helping them.

First, they came to the aid of children during the Manchester bombing. Now, the internet has, in turn, come to the aid of Stephen Jones and Chris Parker, two homeless men who’ve received overwhelming praise in the form of positive comments, monetary donations, and even an offer of housing, after their story went viral.

On Tuesday, less than a day after the Manchester arena bombing killed 22 people and wounded dozens more, CNN affiliate ITV News shared the story of Parker and Jones, two men who were present at the time of the blast and rushed to help screaming women and children before paramedics arrived.

According to ITV News, Jones thought the blast was initially a firework, but then he saw an explosion. That’s when he and Parker realized that people were screaming and running, and the pair rushed toward the action. Jones described how he and Parker wiped blood from children’s faces, had pulled shrapnel from arms, and helped one woman severely bleeding from the legs while waiting for first responders.

“We are human, we still have a heart, we still have that instinct to help people out that need help and that’s what we are doing. And obviously when we are seeing children like that, with blood, and pulling nails out of their arms and stuff, and there were a couple in a girl’s face,” Jones said in the immediate aftermath of the bombing.

“It was children, a lot of children with blood all over them, crying and screaming. If I didn’t help, I wouldn’t be able to live with myself for walking away and leaving kids like that,” he continued.

"We had to pull nails out of children's faces".Steve, a homeless man who was sleeping near #Manchester Arena describes how he rushed to help young victims of the bomb attack. http://bit.ly/2qclPOV

Now, a day after Jones and Parker’s story of heroism has gone viral, strangers have raised money for the pair through crowdfunding platforms, and a co-chairman of the West Ham United Football Club and his son have even offered Jones six months of housing. For Parker, the internet has raised more than $150,000 through GoFundMe, while nearly $30,000 has been raised for Jones through JustGiving.

Additionally, West Ham co-chairman David Sullivan and his son David Sullivan Jr. began looking for Jones on Tuesday in an effort to house him for six months to help him get back on his feet after being homeless for nearly a year.

“What me and my dad saw you do was amazing. Such a selfless act needs rewarding, and we need more people like you in this world. And to be honest, it was the least we could do,” Sullivan Jr. told Jones in a FaceTime call.

Hours later, Sullivan Jr. announced on Twitter that they were able to find Jones, and wrote that they’re still in the process of helping Parker, too.

@DaveSulley all this talk above homeless Steve is brilliant. Although it seems homeless Chris Parker is being forgotten. It would be 1/2

In a followup interview with ITV News, Jones said he’s been touched by the kind comments from people online and is appreciative for the opportunity the Sullivans have given him. But, even though he wants to sort out his life with the generosity from strangers, he still doesn’t classify himself as a hero and says the words of acknowledgment were good enough.

“I had tears in my eyes when reading some of the comments that people put, but I’m no hero. I don’t class myself as a hero—I class myself as a normal citizen that would have done the same as anybody else would have done,” Jones said. “The donations, there was no need to, and just the kind words and acknowledgment was good enough for me honestly, or even if you if you seen me in the street or took me for coffee, that would have been good enough for me.”