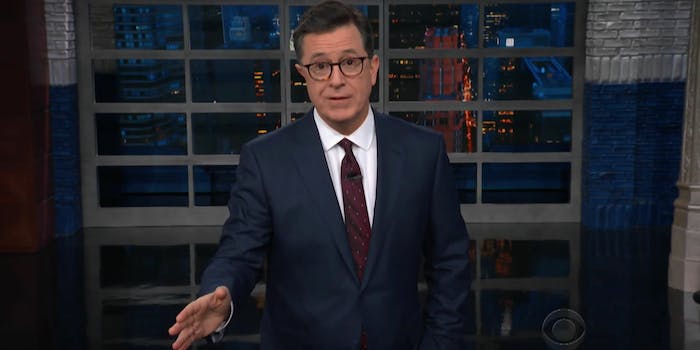 Longtime television host and alleged sexual harasser Charlie Rose is pitching a show in which he would interview high-profile men enveloped in #MeToo scandals. Count Stephen Colbert as one who is perplexed by Rose’s idea.

The late-night talk show host took some time on Friday night to publicly squelch the show idea of Rose, who was accused of sexual assault by at least eight women in the fall of 2017.

“A number of people believe it’s time to forgive and forget, ” Colbert said of #MeToo movement accusations. “Those people? The men.”

Colbert also mentioned Matt Lauer, Mario Batali, and Garrison Keillor for “plotting their comebacks.” Keillor is already performing again after an MPRNews investigation determined he was responsible for “a years-long pattern of behavior” that left several women on his staff “feeling mistreated, sexualized or belittled.”

Charlie Rose made unwanted sexual advances toward female staff and aspiring employees, including “lewd phone calls, walking around naked in their presence, or groping their breasts, buttocks or genital areas,” the Washington Post reported.

Colbert said he just doesn’t see why anyone “would give a show to sexual harassers so they can interview other sexual harassers.” The talk show host brainstormed the title of such a show, saying it could possibly be called “To Catch Up With a Predator.”

The Daily Beast wrote in an opinion article that “it’s hard to imagine something that the world needs less than a project starring Charlie Rose in conversation with men who would be willing to sit down with Charlie Rose and talk about sexual harassment.”

Colbert told his audience there does not appear to be any network, streaming platform, or producer officially attached to the project, and it’s easy to see why. Colbert’s last question on the producer availability was, “Have they called Harvey Weinstein?” We hope not.