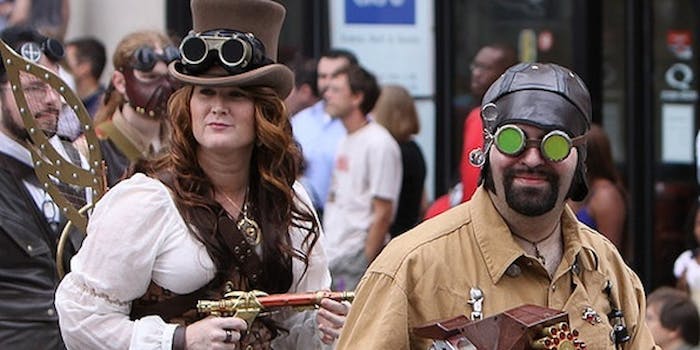 How Etsy shop Steam Circus got its start, and how its creator is in love with Pinterest.

Steampunk offers a fascinating alternate view of the world that is reminiscent of the science fiction universes created by authors Mary Shelley, Jules Verne, and H.G. Wells in their 19th century novels. The genre features a timeline where steam-powered machinery rules in a world in which technology has moved faster than culture often set in Britain’s Victorian era or the American West.

One of the most distinctive aspects of steampunk is its fashion. People donning a mix of Victorian style with aviator goggles, brass gadgets, and clockwork accessories giveaway this science fiction sub-genre and is a fashion growing in popularity, increasingly worn at pop culture conventions around the world.

Brenda Hibbs, who sells steampunk jewelry and accessories at the Etsy shop Steam Circus, told the Daily Dot that steampunk is like any other type of fashion in that it is typified by these specific style elements such as goggles, loupes, pith helmets, ray guns, and bustles but doesn’t limit itself to them. 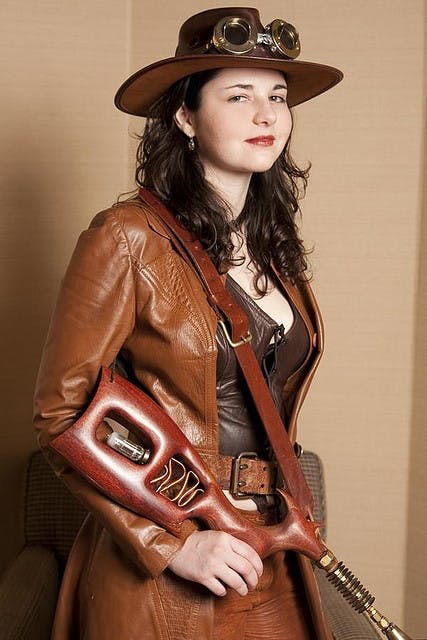 Hibbs’ Pinterest page is a prime example of how steampunk fashion is anything but narrow. Her page displays 73 boards which mainly focus on steampunk and its different aspects. Hibbs’ interest in fashion, machinery, and science fiction like Jules Verne’s Journey to the Center of the Earth started when she was a child. Her love of steampunk, however, was a result of a happy accident. She stumbled across the genre as an adult when she began to explore Ebay.

“I kept running across the terms ‘altered art’ and ‘steampunk,’ but I kept ignoring them because I’d never heard them before. Finally one day I just wondered what they meant, so I looked up steampunk and bam! What I found just about floored me! It was exactly what I’d been looking for—Steampunk embodied my life-long love of history, art, literature, fashion, science and machinery and making,” Hibbs said.

She wanted to create a website that focused on theme categories of steampunk but ran into difficulties until she discovered Pinterest. The site gave her an easier way to develop those categories and create a rich resource for anyone seeking inspiration for all types of steampunk fashion. Her boards are especially helpful as a resource for those new to the style. Hibbs suggests that any beginners who want to get involved in steampunk fashion but don’t know where to start keep things simple.

“Just go for a very basic look that embodies the theme or time period you’re dressing for, then start embellishing. For instance, one friend came dressed in nice black slacks and shoes, vest and a great hat. We added to that goggles on his hat, a cravat and pin, a wonderful 1910’s tailcoat, a few brass chains strung across his vest, including one with a monocle, and just for fun, a bullet-bandolier. Hand him a great ray-gun and voila! Steampunk gentleman,” Hibbs said. 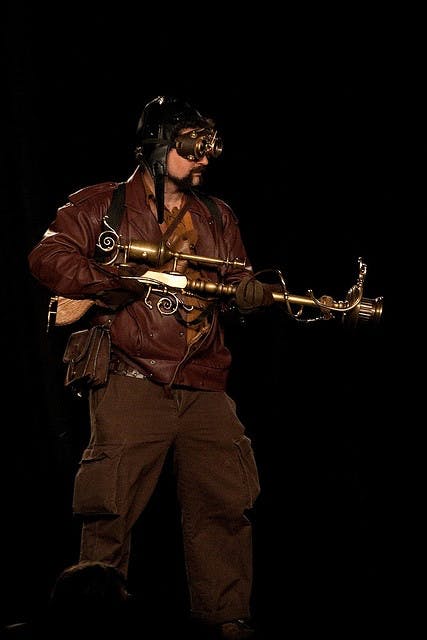 To get ideas for what to add to your outfit, her detailed Pinterest boards offer a useful guide. They collect pins from various areas of steampunk like western, circus, and even everyday options. The way her boards are separated into categories are especially helpful as references for those going to their first steampunk event featuring a specific theme. Hibbs said beginners should explore these pins to find a special item to make or buy for their look.

“Whether it’s a pair of goggles, a vest, a ray gun, even a bag or a pair of shoes, have one piece that’s a focal point. And remember, homemade pieces garner the most appreciation in the steampunk community!” she said. “You just can’t beat starting out simply, then adding on as your own tastes develop. I must say, too, it is my experience that steampunk folk in general are a most encouraging bunch—if you go to an event, ask them questions about their costumes to get ideas!”

Even modern styles can be incorporated into steampunk. According to Hibbs the genre can look very historical but current fashion can be influenced by it as well. For example, she’s worn modern shoes with costumes that match well with the steampunk look because of the heel shape and a few well-placed buttons giving it a Victorian flavor. Don’t be afraid to try to use something in your closet as you develop your own steampunk style. Hibbs said steampunk can be a broad style spanning many cultures, which can be seen with one look at her multicultural board. 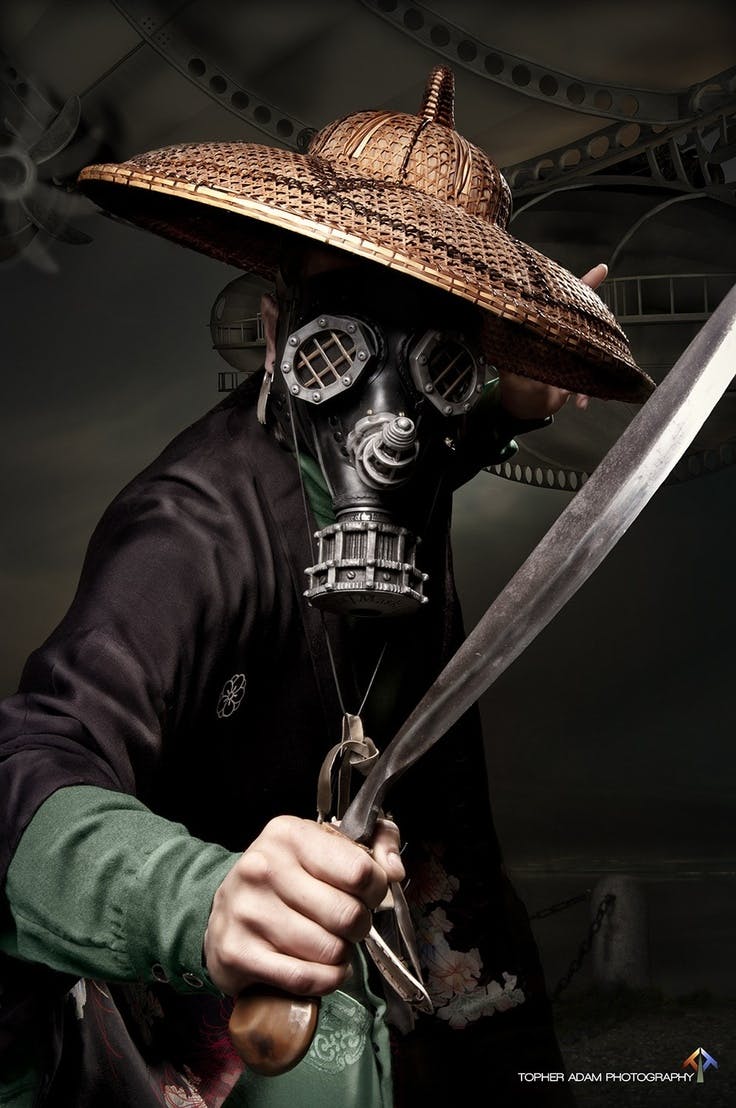 “Even beyond the multicultural aspect, steampunk can embody time periods from Rococo to World War II, depending on a person’s taste. All have their adherents, and all have their own charm,” she said.

If you’re inspired by an item on Pinterest but are having a hard time finding where you can buy it Hibbs recommends looking on Etsy, especially for steampunk accessories, and exploring second-hand stores, garage sales, and antique stores. For further Pinterest resources, other than her boards Hibbs recommends beginners check out Steampunk University, Baroness Violet von Mickelsburg, and keep an eye open for any boards that include DIY tutorials and supply resources. Beginners will find a multitude of resources thanks to the growing steampunk community on the virtual pinboard site.

“One of the things I enjoy about the steampunk community on Pinterest is the diversity—each individual creates boards that relate to their own affinities, so they are creative and unique. Plus, there’s the treasure hunt aspect—always something new that I hadn’t seen before,” she said.

Once you’re comfortable with steampunk there are many sub-genres of the style that can also be explored on Pinterest. Dieselpunk, cyperpunk, atompunk, and decopunk are all beginning to make inroads in the community according to Hibbs and offer more exciting fashions to be explored. 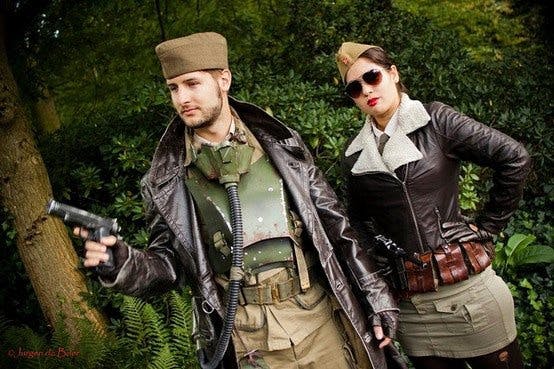 These growing sub-genres show how steampunk fashion is constantly being re-imagined. It’s that creative, open-to-new-ideas atmosphere that makes it a welcoming community beginners can feel comfortable jumping into and asking questions of its members. Hibbs said anyone can enjoy the fashion without worrying about being intimidated or even copying someone else’s style.

“Steampunk is one of the most creative fashion palettes you’ll ever encounter, and individual creativity is prized in the community above all,” Hibbs said. “Don’t be afraid to just communicate…I’ve never had anyone be rude to me, or even unhelpful. Go for it, and have fun!”