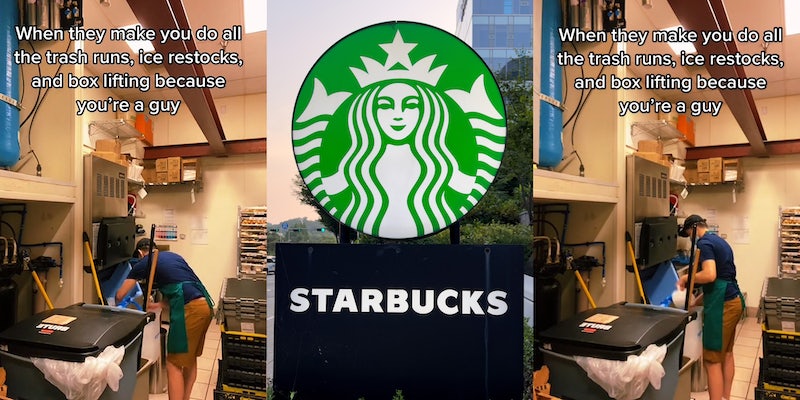 ‘Sometimes u just gotta man up to keep the girlies safe’: Starbucks worker says he has to do ice restocks, trash runs, and box-lifting because he’s a guy

'Bro I do this every weekend when I’m the only guy in the store.'

A Starbucks worker went viral on TikTok after claiming he was made to do all the tasks that involve heavy lifting just because he’s a guy.

The video, which has over 159,000 views, was posted on Sept. 19 by Starbucks employee and TikToker Victor Sanchez (@ew.viktor). The LA-based barista doesn’t post frequently on the platform, but many of his posts are about his job at Starbucks.

In the video, Victor can be seen in the Starbucks store room scooping ice out of the ice bin as audio that says, “You wanna be a girl so bad. You will never be a fucking girl bitch. You is a sir,” plays.

The text overlay on the video explains the point of Victor’s video. It says “When they make you do all the trash runs, ice restocks, and box lifting because you’re a guy,” implying that he is only given the heavy lifting tasks at the store because he is a man.

In the caption, Victor clarified that he’s joking and that the employees alternate those duties. However, that hasn’t stopped viewers from going off in the comments about whether this is a fair practice or not.

Many viewers who also work at the coffee franchise commiserated with Victor. “AY THEY MADE ME DO IT ALL YESTERDAY,” one user said along with a crying face emoji. Victor responded with empathy saying, “During that heat wave last week was the worst.”

Lifting heavy objects is part of the everyday job while working at any Starbucks location. This August 2022 job posting for a Starbucks Barista on ZipRecruiter clearly states that applicants must be able to “move and lift up to 25 lbs.” But workers claim that they’re often made to lift more than what’s stated in their job description.

One person commented that they were hurt on the job because they were made to do such physically intensive tasks. “I’m a 5’2 girl & they make me do all this… last week I hurt my back bc they made me dump the coffee grounds bag & it weighed 30 POUNDS,” one user said.

Victor responded to the comment, agreeing that the coffee grounds are heavy, and said that they “spilled on [him] once.”

Another Starbucks employee also commented, “Bro I do this every weekend when I’m the only guy in the store.” Victor added, “It’s seems like it’s rare when [there are] two guys on the floor at the same time haha.”

However, some Starbucks employees said that they enjoy doing ice restocks and lifting heavy boxes more than dealing with customers. “I always do these since I like that better than being on the floor,” one admitted.

Others claimed that they volunteered to do the physically demanding tasks so their “older coworkers don’t strain themselves.”

The Daily Dot reached out to Victor via TikTok comment and to Starbucks via email.