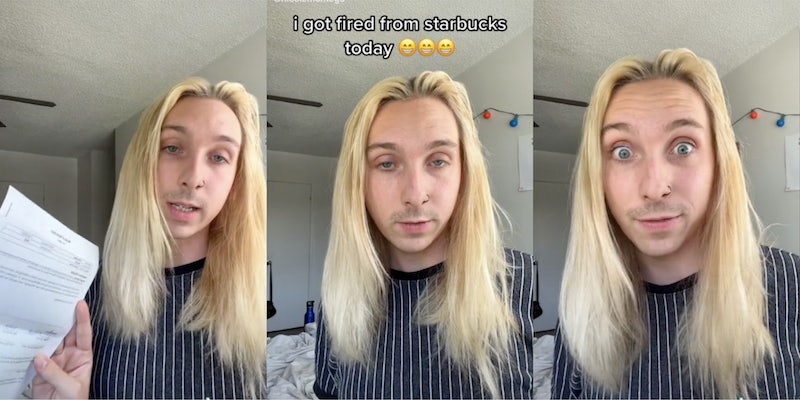 ‘How is Starbucks going to recover from this?’: Starbucks barista says they were fired for ‘theft and misuse of the discount button,’ giving $90-worth of free items to customers

'You already said that I could never work here again, so I will go out with a bang.'

A Starbucks employee who says they were fired for giving discounts to customers and not providing a two-weeks’ notice has gone viral on TikTok for sharing their experience.

In a video posted to the platform that has been viewed more than 137,000 times, Roman (@nicolemontego) says they provided several days’ notice, but not the full two weeks.

“So I got fired from Starbucks today, and the reason is kind of iconic,” they say in the video. “So I am starting a new job tomorrow and I couldn’t give a notice until yesterday and my manager was like, ‘you know you can never work at Starbucks again, because you’re not working an extra two weeks,’ and I’m like, ‘OK. And what? It’s Starbucks. I didn’t work here that long anyway.'”

This led Roman to give out discounted items to a variety of customers.

“So I was like, shit, if I can never work at Starbucks again, (I’ll) give out a bunch of free shit. So I did. And that’s the reason. But what I said is hilarious,” they add.

Roman then begins reading from the notice of separation they received upon termination.

“‘This document is Roman’s notice of separation for theft and misuse of the discount button,'” they read. “How am I stealing? Like if it was stealing, the inventory would be missing and you wouldn’t know where it went. But because I was putting it in the register, and accounting for it, because that’s somebody else’s job and I don’t want to fuck them up, that’s not stealing, that’s me giving a discount. Also, why have the discount button in the first place if you don’t want people giving out discounts? I asked her, and she was like, ‘I don’t know. You shouldn’t have that button.'”

The TikToker goes on to read from the notice that the company fired them over giving 12 individual 100% discounts to customers totaling over $90. According to the notice they read in the video, the discounts are being categorized as theft by the company.

“Oh my god you guys, how is Starbucks going to recover from this,” Roman says in the video, before continuing to read the notice. “‘When asked about the discounts, Roman stated it was no big deal and it was his last day anyway. So aloof.’ It is my last day anyway, and I don’t want to work here ever again. And you already said that I could never work here again, so I will go out with a bang.”

Some viewers praised Roman for the choice to share discounts on their last day.

“Iconic thank you for your service,” one commenter wrote.

“You’re a hero,” another viewer said. “I managed a McDonald’s once and literally gave away free cookies constantly—anytime we had any glitches, free cookies.”

“As an ex Starbucks employee—I love this,” a third stated. “Our store got in trouble for ever using the button. After they told us to daily!”

Many joked about the $90 loss to the company.

“I’m surprised 12 orders only equaled 90 dollars with their exorbitant prices,” one commenter claimed.

“They make 90 dollars off two drive-thru orders,” a second wrote. “As a former starbies manager, you go sis.”

“Noooo not $90 how will they survive,” a further viewer added.

The Daily Dot reached out to Roman via Instagram direct message regarding the video, as well as Starbucks directly via email.

Update 4:21pm CT Oct. 7, 2022: Roman is a barista who formerly worked for Starbucks, and upon giving notice that he was going to leave the company, he was told that he would not be allowed to come back. On his last day, he decided to share some love with customers by giving discounted coffees to customers, and this resulted in a termination even though he was planning on leaving anyway.

“Starbucks in general lately has been rather hostile towards their workers in the form of like, union busting and retaliation for weird things and kind of like petty reasons to fire someone, like what happened to me,” he told the Daily Dot via phone call. “I put in a notice that was short notice. I believe that my manager was just a little bit butthurt and was like, ‘well, he can’t quit. I’m just gonna fire him instead.’”

Roman said he was told that he was not told to use the discount button. He does not believe the company would pursue legal action over the small amount of money lost. However, some viewers reacted negatively to the idea.

“Corporations are not people regardless of what the law may say. Harming a corporation is not the same as harming a person. If you work at a mom-and-pop coffee shop, I can see how doing that could be considered that,” he explained. “But if there’s a button that says free 100% off discount, and you press it, that’s on them for not telling you not to press it.”

Roman said he was leaving Starbucks to work at another coffee shop, and that he was concerned by some of the things he had seen while working there regarding the pastry items on offer.

“There have been times where I’ve had like a couple of pastries in a bag that I forgot about. I’ll find them and they will not have mold on them at all, but they’ll be really wet. I don’t know what is going on with that,” he said. “But I feel like people might want to know about that. Because I definitely would want to know about that if my food was really sweaty, and not going moldy when it’s out.”