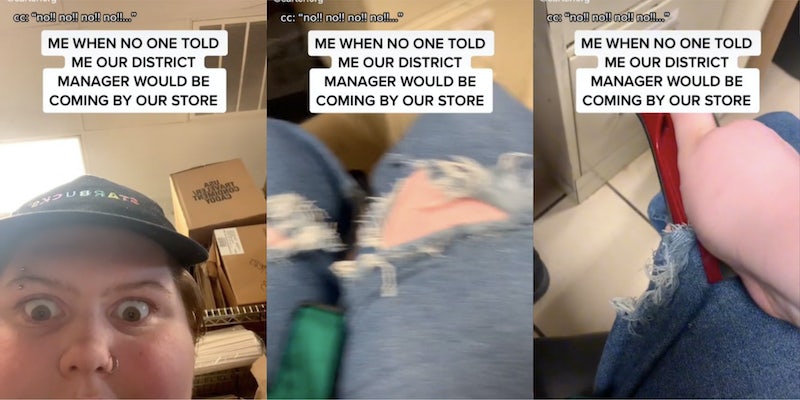 ‘NO ONE TOLD ME OUR DISTRICT MANAGER WOULD BE COMING BY’: Starbucks worker staples ripped jeans together to comply with dress code

'Oh no I fell in the parking lot this morning.'

A Starbucks barista on TikTok says they had to quickly adapt when the district manager visited their store without warning.

The barista, Charlie (@charlie.0rg), posted a video Friday showing their panic. In the video, they’re seen stapling their ripped jeans together to close the holes on the knees.

“ME WHEN NO ONE TOLD ME OUR DISTRICT MANAGER WOULD BE COMING BY OUR STORE,” the video’s on-screen caption says in all caps.

Charlie adds in the video’s caption that the jeans are their favorite pair.

“No literally my store manager would made me stand behind fixtures when they came bc of my jeans,” one viewer commented.

“Me this one time when I had no nametag, sweatpants, and a hoodie on,” a second viewer commented. In reply, Charlie wrote, “I DIDNT HAVE A NAME TAG EITHER AND HE ASKED AND I WAS LIKE ‘i dropped it in the sink while washing dishes’ HAHAH.”

Another viewer said, “I can’t even hide the 3 facial piercings i have [crying emoji] so i hide in the back when she comes.”

Charlie wrote in reply to that comment, “me so i wear a mask around them HAHAH.”

“I kid you not, I super glued mine closed for work cuz I don’t wanna give them up [crying laughing emoji],” someone else said of their jeans.

Others jokingly suggested excuses for Charlie to use to explain their ripped jeans or hide them.

“Oh no I fell in the parking lot this morning,” one user joked.

“COVER IT WITH THE APRON,” another user suggested, but Charlie confirmed they tried and failed.