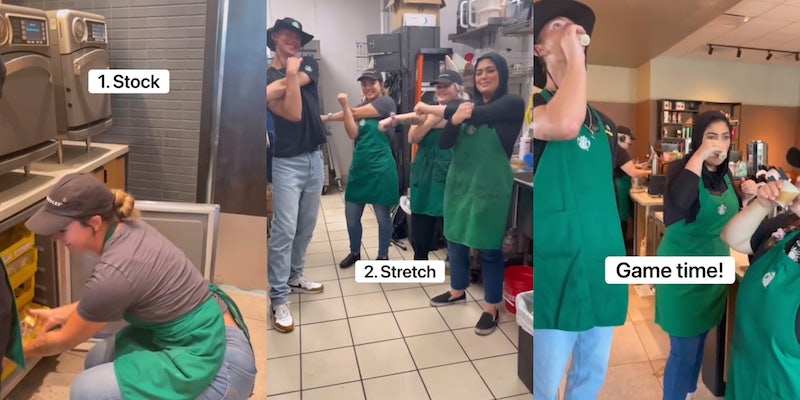 ‘You really think we actually have time to prep before peak starts??’: Starbucks ‘partner’ account blasted as anti-union propaganda on TikTok

'Yeah only if we had enough coverage to even do any of this lol.'

A TikTok account called Starbucks Partners (@starbuckspartners) is being blasted as a “propaganda” social media channel after a video showing employees of the coffee chain getting ready for a busy work day went viral.

Starbucks refers to its employees as “partners” and lists numerous benefits and incentives offered to its workforce on its official corporate website. Many of these perks are also expounded upon in various clips on the corporation’s official TikTok account.

The sixteen-second clip shows a worker emerging from the kitchen, stocking the store shelves while upbeat electronic music plays.

In the video, a series of encouraging text overlays populate the screen that offers up positive commentary on the nature of Starbucks’ employees’ daily activities.

“Time to get ready for peak!” the first caption reads as a smiling worker appears on camera. “1. Stock…2. Stretch,” the clip then cuts to footage of employees stretching in the kitchen area while looking into the camera. “3. Take a shot of nitro!” all of the workers stand behind the counter holding small cups of nitro cold brew coffee, they cheers their cups together before taking their respective sips.

Viewers who saw the clip had several different reactions. Some baristas who work for the Seattle-based brand called the video “fake news” as they don’t have enough time to engage in these activities before a peak or “rush” time. Others remarked that workers for the chain aren’t allowed to drink beverages behind the counter in view of customers.

“We don’t prep we just cry,” one user wrote.

“You really think we actually have time to prep before peak starts?? That’s funny,” a second shared.

“Can’t drink behind the bar,” a third claimed.

Others questioned the validity of the Starbucks Partners account, stating that the content being posted was used as a means to distract folks from the fact many workers at the company are attempting to unionize.

“Wish all starbucks had this much time, but they aren’t properly staffed and their employees aren’t trained. #unionize,” another argued.

“What number is unionize on the list?” a third questioned.

Some claimed that they lack the time for proper preparation due to understaffing. Although there are a number of different industries still suffering from labor shortages in 2022, the ones that have been hit hardest post-COVID are food service and hospitality businesses. Many employees have expressed that they’re being overworked and are experiencing higher levels of on-the-job stress as a result because they’re forced to complete more work than ever before.

“Everything but proper staffing and labor,” one user commented.

“At my store, there’s no time to do all this,” another viewer claimed.

“Yeah only if we had enough coverage to even do any of this lol,” a third laughed.

The subject of Starbucks employees unionizing has been a hot topic of conversation when it comes to labor in the United States. According to Statistics and Data, Starbucks is the world’s third-largest fast-food chain, featuring 20,859 stores worldwide as of 2019. Macrotrends writes that in 2020, Starbucks employed no fewer than 349,000 folks in the US alone.

Perfect Union has been documenting the spread of Starbucks-centric unions in the country as well, noting that 327 stores in 37 different states have already filed for union elections. As of this writing, 244 different stores have won their union elections. The first location to do so was located in Buffalo, NY, and franchises in Cleveland, Ohio, Cambridge, Mass., Richmond, Va., Independence, Mo., Portland, Oregon, and many others have followed suit. In several locations, voting victories were unanimous, but there have been several stores that have rejected unions entirely, while others decisions pending.

The Daily Dot has reached out to the Starbucks Partners TikTok account via comment and Starbucks PR via email for more information.